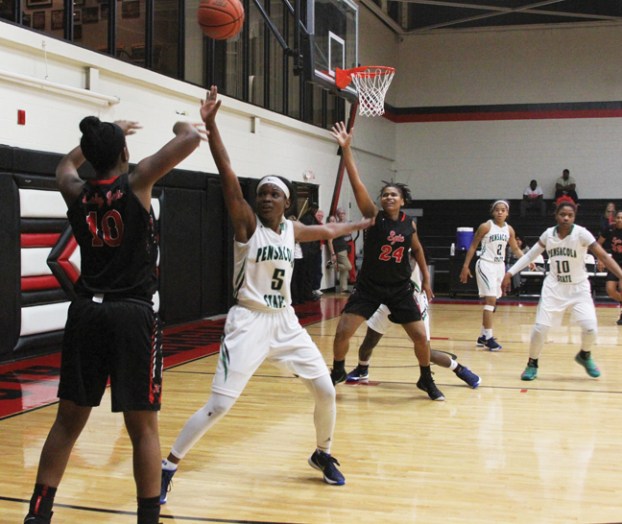 Michael Murray/Americus Times-Recorder: SGTC’s La’Deija James tosses up a three-pointer during the first half of the Lady Jets’ Jan. 30 contest against Pensacola State.

AMERICUS – The South Georgia Technical College (SGTC) Lady Jets stretched their winning streak to eight straight games before the close of 2015, with a three-game sweep of the annual SGTC Classic in Americus.
After taking down Broward College on Dec. 29 in an exciting 63-60 come-from-behind victory in the initial contest of the tournament, the Lady Jets went on to earn an impressive 66-37 win over Pensacola State Community College in the second night of play.
On New Year’s Eve, SGTC took on Gadsden State to close out the tournament. SGTC’s ladies kept the streak alive, bringing home a 69-43 victory over the Gadsden State community College Lady Cardinals, of Gadsden, AL.
The series leaves the Lady Jets with a 14-4 overall record and a 4-1 record in the Georgia College Athletic Association (GCAA). With their impressive record, the SGTC Ladies are currently ranked first in the GCAA.
On day two of the tournament, the Lady Jets started out very slow against Pensacola State. SGTC led 10–7 at the end of the first quarter, but had stretched that lead to 33-16 by the half-time break.
The home team continued to pound away at Pensacola’s defensive efforts in the second half of the contest and coasted to the 66–37 victory.
Sophomores, Angela Tompkins and Molly Brown, put on an offensive show for the Lady Jets. Tompkins led the team with 21 points, but Brown was close behind with 17, including four spot-on three pointers in six attempts. Brown also grabbed five rebounds. Tompkins pulled down 12 rebounds while dishing out one assist, two steals, and one blocked shot.
Sophomore, Claudia Perez, came off the bench to close out the double digit scoring with 10 points. Other Lady Jets scoring included Le’Deja James with seven points and Kendra Greene with four points. Brook Burns added three points while Kayla Mallett and Mikaela Jones both contributed two.
Mallett, a 6’ 3” freshman from Melbourne, Australia, recently joined the team and scored despite seeing very limited playing time. She is a recent graduate from Maribyrnong High School in Australia.
The final round of the tournament saw the Lady Jets bring the same fierce style of competition to the court in Americus.
South Georgia Tech’s ladies came out strong from the tip-off. The Lady Jets scored first in that contest and never looked back, gaining a 19-14 advantage in the first period. They were up by as many as 14 in the opening minutes of the game.
The Lady Jets made a hard defensive push in the second frame to hold Gadsden to only nine more points before the half, while adding another 16 to their own tally.
SGTC held the Lady Cardinals to single digits in the third period as well, allowing only nine points to be scored on their goal, all the while tacking on another 17 to their own total.
The action continued in much the same manner in the final period, with SGTC adding 11 more for a 69-point total at the buzzer. Gadsden tossed in 11 points in the fourth frame for a total of 43.
The Lady Jets had four players in double-figures in the match-up with Gadsden State. Tompkins was the leading scorer with 17 points. She sank eight of 14 from the floor and also had six rebounds and one assist. Cierra Bond hit a trio of three-point shots and wound up with a total of 14 points. Bond was followed by Brown and Perez, who each tossed in 11 points. Brown and Perez brought down four rebounds each.
The Lady Jets returned to the hardwood on Jan. 3 to battle Shelton State Community College in Tuscaloosa, AL. The match saw the Lady Jets’ winning streak broken as their non-conference foes dealt the Americus team an 80-47 defeat.
SGTC will return to conference play on Jan. 6, traveling to Albany to take on Darton. The team will return to the court in Americus on Jan. 11, battling Chattahochee Tech.