New inductees to the GSW chapter of the National Honor Society for Leadership and Success.

AMERICUS — The Georgia Southwestern State University chapter of the National Honor Society of Leadership and Success (Sigma Alpha Pi) held its member induction ceremony on Dec. 1. At the ceremony, the society inducted new members as well as recognized several faculty members with awards.
Sigma Alpha Pi is the country’s largest honor society for leadership. Students are selected for membership based on academic standing or leadership potential.
Members of the GSW chapter assist on campus with graduation ceremonies and convocations as ushers and with events like Campus Pride Day. They also do community outreach with organizations such as the Sumter Humane Society and Court Appointed Special Advocates (CASA).
At the induction ceremony, the honor society inducted 33 new members.
“Sigma Alpha Pi benefits the members by holding them each accountable towards their academic and personal goals,” said Josh Curtin, director of Campus Life and advisor for the honor society. “Through Success Networking Team meetings, each student can share their thoughts and ideas on how to better each other towards the progression of their goals. It’s a pretty amazing concept.”
So far, the GSW chapter of the society has inducted 469 members and has 150 students that were invited through GSW to complete the online program.
Each semester, chapter awards are nominated by the society student members and presented to faculty at the induction ceremony.
For fall semester 2015, the Honorary Membership Award went to Mark Grimes, assistant professor in the School of Business Administration; Judy Orton Grissett, assistant professor of psychology; and Talisha Adams, general education advisor/retention specialist.
Excellence in Teaching awards were presented to Susan Bragg, assistant professor of history, and Otto Lorenz, assistant professor of biology.
Excellence in Service awards went to Mark Grimes; Rhonda Slocumb, lecturer in the School of Nursing; and Ellen Cotter, professor of psychology. 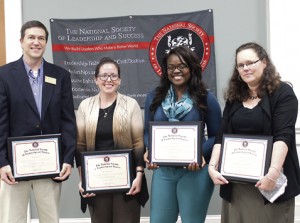 Sumter Middle kicks off focus on literacy with community readers