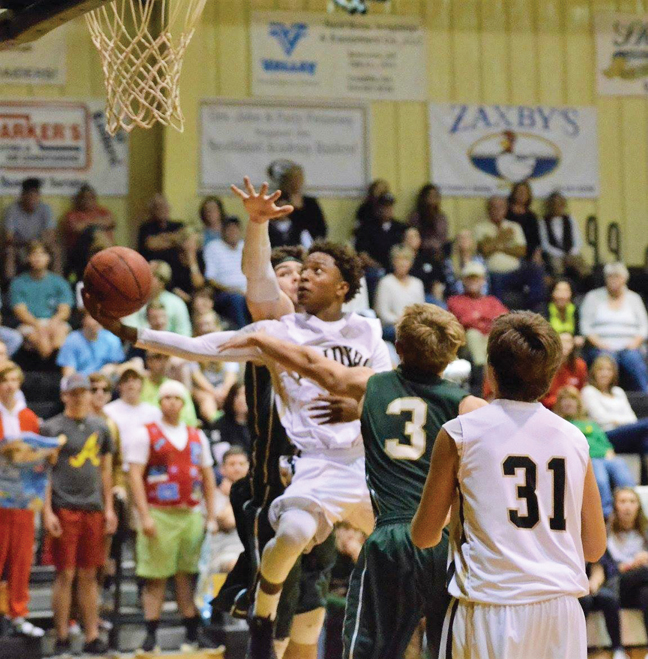 Photo by Dawn Shattles: Southland’s Jamaal Rice bursts through a pair of defenders on his way to the bucket during an early season contest in Americus. Rice led the Raiders to their Jan. 5 victory over the Westwood Wildcats, scoring a game-high 30 points.

CAMILLA – The Southland Academy Raiders opened region 3-IAAA competition on Jan. 5, traveling to Camilla to take on the Westwood Wildcats. After a hard-fought, high-scoring battle, the Raiders managed to pull ahead and earn a 73-70 victory over their hosts.
The win leaves the Raiders with a 7-2 overall record on the season. Southland’s boys are currently 1-0 in region 3-IAAA competition.
Both teams got off to an explosive start in the contest as they took turns scoring throughout the first quarter. The Raiders managed to grab a slight edge over the Wildcats in the initial frame, taking an 18-17 lead into the second quarter.
The action continued in the second stanza, as the teams went point-for-point over the next eight minutes, both adding 14 to their total. The Raiders held on tightly to a 32-31 lead going into half-time.
The Wildcats returned from the break, rested and ready to show the visiting Raiders that they meant business. In the third period, the Westwood boys tightened up their defense while making a hard offensive push to outscore the Raiders 21-16 and take a 52-48 lead into the final period.
When the final frame commenced, it was the Raiders’ turn to stage their comeback. Early in the quarter, Southland’s shooters found their groove and went on to have their most productive period of the contest, tossing in 25 points. As the Raiders went on their scoring spree, the team’s determined defense held Westwood to only 18 points, cinching the region win for the visitors.
After the victory, Raider head coach, Rundy Foster, told the Times-Recorder, “Our region is very balanced this year. For us to get this win on the road was big. Josh McKie had a great game off the bench with 11 rebounds.”
Jamaal Rice paced the Raiders’ offensive efforts with a game-high 30 points in the competition, narrowly missing a double double with nine rebounds. Alex Roach connected on a trio of three-pointers on his way to 17 points. McKie led the team on the boards with his 11 rebounds.
The Raiders returned to region 3-IAAA action on Jan. 8, to defend their untarnished conference record against the Tiftarea Panthers. The results of this contest were not available at press time.
Southland’s boys return to action on Jan. 12, hosting the Terrell Academy Eagles in another region match. 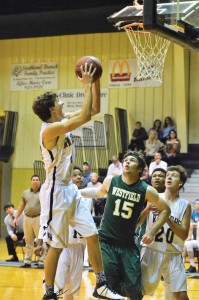 Photo by Dawn Shattles:
Southland’s Josh McKie authoritatively brings down a rebound during an early season contest in Americus. McKie grabbed a team-high 11 rebounds during the Raiders’ Jan. 5 victory over the Westwood Wildcats.