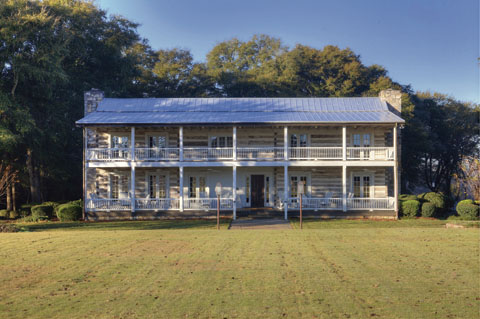 AMERICUS — Shortly after the Revolutionary War when our country was in its infancy, a small log cabin was built as the home of a pioneer family in the area of what is now known as Wytheville, West Virginia. As the years passed, ownership changed and additions were made until finally there were four adjoining cabins and a center dog trot.
The cabin and its additions were of such sturdy construction, that 200 years later in the 1980s the historic structure that had seen so much life come and go was still standing. That’s when my good friend, Eleanor Powell saw it and purchased it to give her husband, Richard Powell, for his 50th birthday in 1985. The house was dismantled log-by-log, numbered then loaded onto 20 tractor trailers and moved to Americus to become the Powells’ home.
Sally Run, so named by one of the first owners (another story), was rebuilt under the Powells’ supervision and brought up to date,  which took about a year, and continues to proudly stand on pristine property on the South Lee Street Road just outside the city limits.
For many years, Eleanor and Richard enjoyed their log home where they entertained family and friends and graciously opened it for home tours, numerous Sumter Historic Trust Christmas galas and private receptions over the years. Eleanor died in the mid-1990s; Richard passed away almost two years ago and Sally Run was inherited by their sons Rick Powell of Americus and Ken Powell of Gainesville, Georgia, but neither one wanted to sell.
“We thought the house was a special place full of happy memories of Eleanor and Richard there,” said Genie Powell, Rick’s wife. They mulled ideas for a solution with their friend Mark Minick of Minick Interiors who suggested turning the house into a venue for special events such as weddings, corporation functions, family reunions and holiday events. Located only five miles from downtown Americus, the location is ideal. The suggestion clicked and the Powells began to renovate.
There was much work to do. Sally Run has an ideal open floor plan on two floors boasting tall ceilings and spacious rooms. The wide front porch opens into the large foyer flanked on either side by the library and dining room and small hall that enters into the great room and adjacent glass-walled sunroom overlooking the flagstone patio. Upstairs is a loft that has a view of the great room below, large master bedroom and bath suite that open onto the upstairs porch, a guest room and sleeping porch. Altogether the house sleeps 12.
Genie was in charge of renovating and with her husband’s support the hard work began but she became overwhelmed on organizing a plan. She mentioned the problem to a good friend, Andrea Perry Powell, an antique dealer and interior designer of Perry’s Styles, and things began rolling.
“We couldn’t have done it without Andrea,” said Genie. “We took a legal pad and went room by room to make a plan and decide on paint colors and furniture placement.”
They kept many of the family’s original pieces and added some new, and today the house is a tasteful mixture of antiques, vintage pieces and collectibles that are set off by a pleasing palette of wall colors upstairs and down.
For five months, they worked long days and through the heat of summer to complete the mammoth project just in time for the first event: the wedding reception honoring Angie Davenport and Jesse Miller last September. Other weddings are booked for this year as well as many other functions that range from garden club events to organization’s functions.
Genie and Rick are happy with the renovations and said, “We think Richard and Eleanor would be pleased and happy, too.”
The venue’s website Sallyrun.net is under construction and will soon be active. 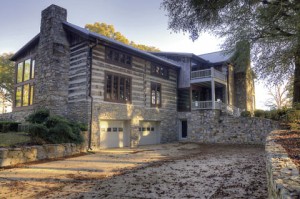 A view of the rear of the Sally Run property.. 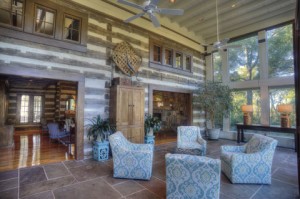 The atrium offers a more panoramic view of the vista behind the historic log house. 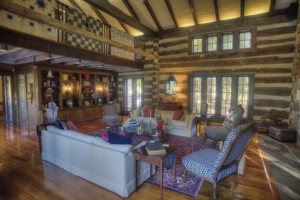 The great room of Sally Run offers an inviting interior with windows overlooking the lush landscape behind the house.

By MICHAEL MURRAY michael.murray@americustimesrecorder.com A lot can happen in 365 days. As the year 2015 winds to a close, we,... read more