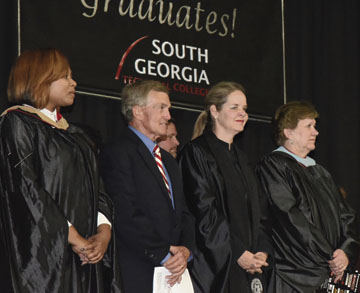 AMERICUS — Technical College System of Georgia Commissioner Gretchen Corbin was the keynote speaker at the South Georgia Technical College (SGTC) 2015 fall commencement ceremony Dec. 15 in the James S. Peters Gymnasium on the Americus campus in front of a capacity crowd.
“Graduates when you leave the stage today, you will hold a piece of paper that will change your life for the better,” said Commissioner Corbin as she addressed the over 200 graduates who had earned an associate of applied science degree or a diploma.
“This piece of paper or diploma, is your pathway to a well-paying future,” she said. “You are accomplished individuals. You have a marketable skill. You have received a degree from an accredited college. This college has business partners that support you and your college. These business and industry partners want and need you to fill their positions and grow into positions of leadership.”
In her closing remarks, the commissioner asked each graduate to be an ambassador for SGTC and the Technical College System of Georgia.
“Tell others about South Georgia Tech, Technical Education, and Adult Education,” she said. “Encourage them to pursue their pathway to a well-paying future. And lastly, give back to your community through service and hard work. I am proud of you and proud of your accomplishments. Congratulations Class of 2015!”
In addition to the keynote speech by Corbin, SGTC’s Instructor of the Year, Raven Payne, also had brief comments.
Payne, who has been a general education instructor at SGTC since 2009, said, “You have created a great foundation for your future because you have been disciplined in your studies to make it here tonight. You have become exactly what you dreamed of, a graduate. You are ready for the next chapter of your lives. Commit to becoming a lifelong learner. Choose to never stop believing, never stop dreaming and never stop learning. I wish you much success in your bright future!”
Over 200 individuals earned the associate of applied science degree or a diploma for the Fall commencement ceremony.  Eighty-six of those students qualified as either a Presidential Honor or regular Honor Graduate and earned awards of an associate degree. A total of 600 students have earned degrees or diplomas from South Georgia Tech between the combined Spring and Fall graduations.
Students must have an overall grade point average of 3.9 or higher to qualify as a Presidential honor graduate and a grade point average of 3.70 to 3.89 to qualify as an honor graduate.
SGTC Acting President Janice Davis welcomed graduates and their families and recognized special guests. She also introduced TCSG Commissioner Corbin as the keynote speaker and introduced SGTC’s Instructor of the Year Raven Payne.
Vice President for Academic Affairs John Watford, Ed.D.,  presided over the graduation ceremony and introduced the Rev. Bill Dupree who gave the invocation.
Corbin, Davis, Watford, and Academic Deans Raymond Holt, David Finley, Ed.D., Andrea Oates, Ed.D., and Vanessa Wall participated in the presentation of the degrees and diplomas to the graduates.  Fifty-six students received associate of applied science degrees and 157 diplomas were awarded.
SGTC students from the Times-Recorder’s coverage area who earned the distinction of graduating as Presidential Honor graduates and their respective fields of study  included: aviation maintenance technology, Brandon Richard Ehler of Americus and Benjamin Aaron Wisham of Plains; air conditioning technology (AAS) Thomas Robert Lingefelt of Ellaville; culinary arts (diploma), Keandra Bridges of Americus; early childhood care education (AAS), Tia Champion of Buena Vista; industrial systems technology, (diploma), Richard Neal Stephens Jr. of Ellaville.
SGTC students in the Times-Recorder coverage area who earned the distinction of graduating as Honor graduates (3.70 – 3.89 GPA) and their respective fields of study included: agricultural technology (AAS), Corey Christian Palmer of Lake Butler, Fla.; aircraft structural technology, Josh G. Bailey of Ellaville and Jaquavius Leary of Oglethorpe; horticulture (diploma), Linda Anita Heath Johnson of Oglethorpe.
Fifty seven students earned associate of applied science degrees and those students and their programs of study included:  accounting, Randae’ Lowe Dodson and Otisia Eunique Seay of Americus; Andrew Vestal Arnold III of Americus, Zach Melton of Parrott, Matthew Eric Miller of Street, Md.: Mark Aaron Nelson of Foley, Ala.; Corey Christian Palmer of Lake Butler, Fla.;
Air conditioning technology, Thomas Robert Lingefelt of Ellaville; business administration technology, Jeremy Marque Larry of Montezuma; computer support specialist, William Jeffrey Askerzada, Delores Jackson and Mary Frances Thomas of Americus, Christopher Casey of Dawson;
Criminal justice technology, James Nathan Chapman, Keldrick Cochran, Amy Nelson Conner, Jessica Y. Maxwell, Theresa Sanford, and Lashondia Lakeasha Terry of Americus, Khadija Shakeira Gray of Buena Vista, Kensley Harris of Montezuma, Adrian L. Isreal of Oglethorpe;
Culinary arts,  Timothy B. Powell of Americus and Ty Smith of Ellaville; early childhood care & education, Tia Champion of Buena Vista; Marketing management, Devon Varnum of Americus.
Members of the National Technical Honor Society included Tia Champion of Buena Vista and Benjamin Aaron Wisham of Plains, for the Times-Recorder’s coverage area.
After each graduate had received their award, Vice President Watford declared to Acting President Davis that each graduate had completed the requirements for graduation as set forth by the Technical College System of Georgia (TCSG).
Afterwards, the Rev. Bill Dupree gave the benediction and the graduates recessed to the music of Pomp and Circumstance performed by Elaine Skipper, pianist. 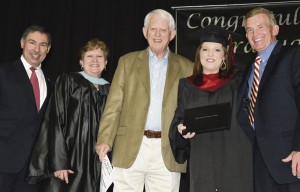 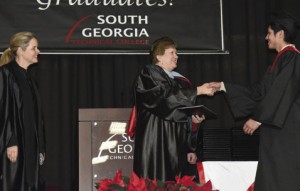 By LEILA S. CASE www.americustimesrecorder.com AMERICUS — Shortly after the Revolutionary War when our country was in its infancy, a... read more