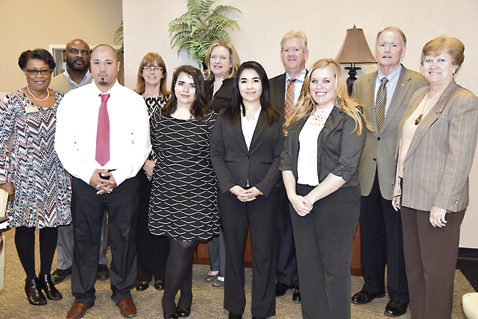 AMERICUS — South Georgia Technical College’s (SGTC) 2016 GOAL (Georgia Occupational Award of Leadership) semi-finalists were recently interviewed by the GOAL selection committee following a special luncheon that honored the GOAL semi-finalists, all GOAL nominees, the GOAL selection and screening committees, and nominating instructors.
Cynthia Carter, GOAL coordinator and SGTC director of Career Services, welcomed the crowd to the annual GOAL luncheon and SGTC Vice President of Academic Affairs  John Watford, Ed.D., gave the invocation. SGTC Acting President Janice Davis recognized special guests at the luncheon, which included SGTC’s GOAL screening and selection committees. The screening committee, who selected the four semi-finalists from a selection of all GOAL nominees, consisted of SGTC staff members Deborah Jones, Ed.D., assistant vice president for Student Navigation; Mark Brooks, director of Administrative Services; Julie Partain, registrar; Sammy Stone, director of Campus Safety; and Dianne Trueblood, Media specialist.
The selection committee, who interviewed the four finalists following the luncheon, included Victoria Harris, former associate superintendent of Sumter County Schools; Jay Roberts, 2016 chairman of the Sumter County Chamber of Commerce; Jackie Bryce, owner of Star Racing; Daron Butler, assistant administrator at Magnolia Manor Nursing Center; Barbara Grogan, executive director of the Americus-Sumter County Payroll Development Authority; and Don Smith, assistant to the president at SGTC.
Carter then recognized each of the GOAL nominees and semi-finalists, as well as their nominating instructors. The semi-finalists included Ashley E. Rodgers of Oglethorpe, marketing management; Monica Castaneda Parra of Ellaville, accounting; Calli S. Buttrey of Americus, criminal justice technology; and Ricardo Rivera of Vienna, air conditioning technology.
Additional GOAL nominees included Douglas T. Jones of Perry, air conditioning technology; Destiny K.S. Walker of Oglethorpe, criminal justice technology; Tramarvious D. Hosley of Montezuma, culinary arts; Jennifer L. Rix of Americus, horticulture; and Danny O. Williams of Cordele, welding and joining technology.
“Calli is very hard-working, observant, and kind,” said nominating instructor Teresa McCook of her student, Calli S. Buttrey.
“I came to SGTC to get my GED, and everyone was so welcoming here that I decided to enroll in criminal justice technology. I want to become a prosecutor someday, so this was a perfect match for me,” said Buttrey. “Being a student at SGTC has given me so much self-confidence.”
Of her nominee, Monica Castaneda Parra, nominating instructor Brenda H. Boone said, “Monica exemplifies the attributes a career-oriented student should have. She has great organizational skills, is a dedicated team player, and on top of being a student at SGTC, she is also the Student Government Association representative for accounting, and she works as a bookkeeper. She’s even received a promotion at work for putting the skills she’s learned in the classroom to good use in her career.”
“It’s always been a dream of mine to come to college,” said Castaneda. “My parents came to America 20 years ago seeking a better life with more opportunities. I took the opportunity DACA (Deferred Action for Childhood Arrivals) gave me, and I toured lots of colleges. Technical education works for me because it prepares you for a long-term career, not just an entry-level job.”
Castaneda said she wants to become a CPA, and SGTC has helped her get closer to her “American dream.” In June, she will be the first of her family to become a college graduate.
Ricardo Rivera, the semi-finalist from the air conditioning technology program, is the son of a migrant worker who also came to America seeking a better life. He is a single father of two children, aged 6 and 7, and has served as a role model to his classmates.
“I’ve always been taught to work very hard and appreciate what I have,” said Rivera. “At 17, I got my GED after years of working in the fields.”
Rivera went to work as a subcontractor for Lowe’s Home Improvement, but unfortunately sustained a back injury in January 2013, and was forced into a different field after 16 months in rehab. He chose the heating and air industry for his new beginning.
“I want a better future for my children, and my education at SGTC can give them that,” he said.
Nominating instructor Mary Cross said of her nominee, Ashley Rodgers, “My goal in the marketing management program is to get a student ready for his or her career path, and Ashley already had the skills to become a very successful person when I met her. As she’s progressed through the program, she’s become heavily involved in student activities, including SkillsUSA, DECA, and more, all while attending classes full-time and working three part-time jobs.”
Rodgers admitted that her road to success has not been an easy one, and she had many things to overcome. After a childhood of abuse and bullying, Rodgers said she had no direction.
“Technical education allowed me to stand on my feet for the first time in so many years,” said Rodgers. “The faculty, staff, and students at SGTC encouraged me and supported me, and I found real joy in this educational system. If you had told me two or three years ago that I would be standing right here, I’d never have believed you.”
Rodgers added that the flexibility SGTC offers her has allowed her to work those three part-time jobs and be able to afford her education.
“This selection committee really has their work cut out for them,” GOAL Coordinator Cynthia Carter added following the students’ phenomenal speeches. The SGTC 2016 GOAL winner will be announced in February, and from there, he or she will compete at southwest regional judging. Three finalists from that region will be named and will compete in the state GOAL competition in Atlanta in April, and vie to be named the 2016 statewide GOAL winner. The state GOAL winner becomes the student ambassador for the Technical College System of Georgia, and receives the grand prize of a new car.

Center Associate of the Year