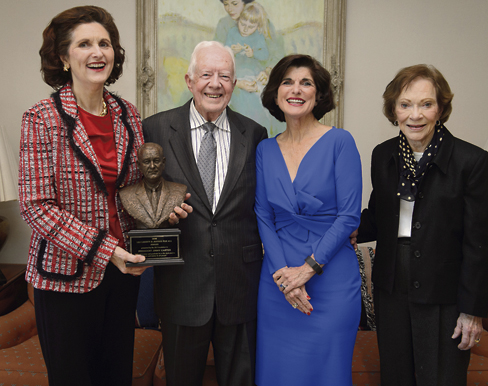 ATLANTA — The LBJ Foundation has awarded its most prestigious prize, the LBJ Liberty and Justice for All Award, to former President Jimmy Carter in recognition of his leadership in public service and his tireless efforts toward peace and human rights. In a ceremony on Jan. 13, at the offices of the 39th President in Atlanta, LBJ Foundation Trustees presented the award to President Carter with his wife Rosalynn, at his side. Representing the Johnson family were Lynda Johnson Robb and Luci Baines Johnson.
The LBJ Liberty and Justice for All Award honors those, like Carter, who personify Johnson’s belief that the mission of public service is “to right wrong, to do justice, to serve man.” At age 91, Carter epitomizes Johnson’s passion for justice and dream of bridging racial and economic divides.
Larry Temple, chairman of the LBJ Foundation, made the award presentation.
“Throughout his rich and fruitful life, President Carter has shown a deep commitment to fostering liberty and ensuring justice for all, ideals that President Johnson held dear,” said Temple. “We at the LBJ Foundation are pleased to give this award to President Carter, who embodies the best of who we are as Americans.”
Though Johnson and Carter never met, as governor of Georgia, Carter wrote former President Johnson a handwritten note in December 1972, after a Civil Rights Symposium Johnson had convened at his presidential library. It read in part, “I have long admired you personally and deeply appreciate your tremendous and unprecedented achievements as president.” Johnson died a month later.
“It is a great personal honor to be given the Liberty & Justice for All Award in the name of Lyndon Johnson, a man who helped shape my life and for whom I have the greatest admiration and appreciation,” said Carter.
When Jimmy Carter was elected president in 1976, he appointed a record number of minorities to high federal positions, created the Department of Education, strengthened Social Security, and negotiated a historic peace agreement between Israel and Egypt, which remains in place today.
Carter is one of four American Presidents to win the Nobel Peace Prize, which he received in 2002, and the only one to do so as a former President. The recognition furthered his international reputation as a humanitarian and peace broker.
Last year, Carter captured the world’s attention and admiration when he announced with characteristic candor and openness that he had cancer. Even while undergoing treatment, Carter never slowed in his work at The Carter Center, a non-profit he and his wife established in 1982, with the mission of a fundamental commitment to human rights and the alleviation of human suffering. Four months after his diagnosis, Carter announced he is free of cancer.
In a 2013 Parade magazine article, Carter talked with LBJ Library Director Mark Updegrove about his own legacy.
“I’d like to be judged by our work at The Carter Center for the last 32 years,” he said. “I don’t mean to exclude the White House, but in my more self-satisfied moments, I think about our unwavering promotion of peace and human rights. We never deliberately deviate from those commitments, even though it’s sometimes not a popular thing to do.”
The LBJ Library has been fortunate to host Carter throughout the years. Most recently, on April 8, 2014, the former President was one of four U. S. Presidents who spoke at the Civil Rights Summit commemorating the 50th anniversary of the Civil Rights Act. As a son of the south, Carter spoke of the “gross disparity” that still exists between America’s black and white populations in unemployment and education.

About the LBJ Liberty and Justice for All Award:
The LBJ Foundation created the Liberty and Justice for All Award to recognize and honor individuals who, in their own unique way, have expanded the opportunities for all of our citizens and carried forward the legacy of President Johnson whose legislative achievements shaped the next half century of our national history – the Civil Rights Act of 1964, the Voting Rights Act of 1965, the Fair Housing Act of 1968, Head Start, Medicare, Medicaid, Job Corps, the Clean Air Act, the National Endowment for the Arts and the Humanities, and many more.

About the LBJ Foundation:
The Lyndon Baines Johnson Foundation is a non-profit organization that supports the LBJ Presidential Library and the LBJ School of Public Affairs at The University of Texas at Austin.  Through the fundraising efforts of its Board of Trustees, the Foundation provides support to the Library that enhances quality programming, expands educational outreach and exhibits, and gives grants to researchers and scholars.   The Foundation supports the LBJ School by providing funds for student scholarships and faculty endowments with the goal of attracting the brightest minds and preparing students for public policy leadership positions.