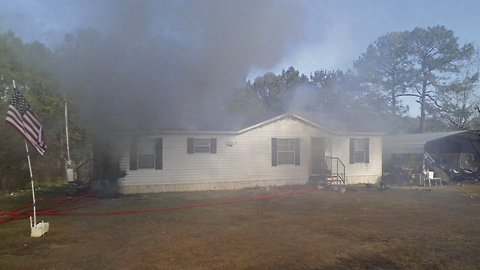 This is the scene at 112 Lake Ridge Drive Extension shortly after 11 a.m. Tuesday when fire personnal arrived on scene. The fire is believed to have started in the laundry room, located on the left front of the house, and extended into the attic.

AMERICUS — Sumter County Fire & Rescue responded shortly after 11 a.m. Tuesday to a report of a house fire at 112 Lake Ridge Drive Extension in Americus.
According to Sumter County Fire  Chief John Ekaitis, Sumter County Fire units arrived on the scene within five minutes and found fire venting from the left side of the structure, from the laundry room. As the firefighters advanced hose lines into the structure they found heavy fire throughout the attic area. The firefighters attacked the fire and had the fire under control within 10 minute, the chief said.
There were no reported injuries and the Sumter County Fire and Rescue responded with three engines and two tankers along with 17 firefighters.
Ekaitis said the home was occupied when the fire was reported.,
Americus City Council member Shirley Green Reese, who is a friend of the occupant of the house, Leroy Henderson, is asking the community for help.
She said Henderson lost most ll of his possessions in the fire and is in need of men’s clothing: shirts, large, 17 & 17 1/2; pants, 36/32 & 38/33; blazers, X-large and 44/46 long; heavy coats, 44/46 long and x-large; socks, x-large and xx-large; underwear, 36 waist and 38 waist; shoes, 10.5 and 11; and hats or caps.
Reese said that Henderson can be contacted at 229-395-7647.