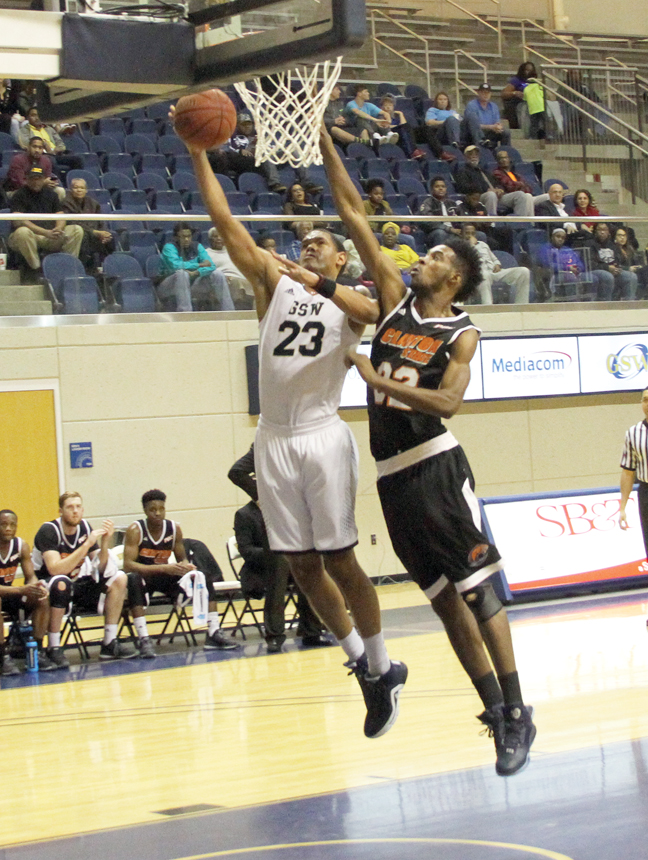 Michael Murray/Americus Times-Recorder: Chandler Thomas lais up a bucket on Jan. 26 in the Storm ome. Thomas was among five ‘Canes to score double digits in the contest, with 22 points.

AMERICUS – Despite allowing a season-high 61.4 percent shooting percentage to Clayton State on the evening of Jan. 27, the Georgia Southwestern men’s basketball team had the ball and a chance to take the lead in the game’s final minute, but came up on the short end of an 84-82 Peach Belt Conference (PBC) clash in the Storm Dome.
The Hurricanes fell to 8-10 overall and 4-7 in the PBC while Clayton State won its fourth straight game and improved to 12-6, 7-4 in conference play.
Balanced scoring paved the way once again for the the Hurricanes as five players scored in double digits, led by Chandler Thomas with a game-high 22 points in only 25 minutes of action. Damien Leonard sank six from beyond the arc for his 18 points. Adam Thoseby scored 13 and Brandon Price added another 12 along with eight assists. Jure Gunjina chipped in 11 points.
GSW shot over 50 percent (50.9) for the fifth time this season and the drop off was negligible when the Hurricanes took a step behind the arc where they drained 16 of 33 (48.5 percent) to match the second-most three-pointers made in a game during the program’s NCAA era.
Clayton State had five players score in double figures as well, led by Dantez Bennamon with 18 points. Saiquan Terry scored 17 and Alfonso Davis chipped in 15 to go with a game-high nine rebounds. Nathan Powell and Kendall Joseph added 11 points apiece.
Southwestern utilized a 12-5 run to close out the first half and take a 43-36 lead into the locker room. For only the second time in eight chances this season, the Hurricanes did not hold on to win a game where they led at the break.
Clayton State erased its half-time deficit by the 12:48 mark of the second stanza and the sides found themselves tied at 61-61, 68-68 and 70-70 before the Lakers went on a 10-1 run to generate the cushion necessary to hold off GSW over the final five and a half minutes despite a late push by the Hurricanes.
Trailing by two points with 1:05 remaining, GSW ran the shot clock down to two seconds before turning the ball over with an errant pass. Clayton State made one of two free throws on the ensuing possession to give GSW a chance to tie or score a quick basket, but the Hurricanes missed a running lay-up in the lane with 14 seconds left. The final free throw by Clayton State made it a two-possession game with only seven seconds remaining.
The Hurricanes play the second game of their three-game homestand on Jan. 30 at 4:30 p.m. against Columbus State on Phoebe Sumter Medical Day.