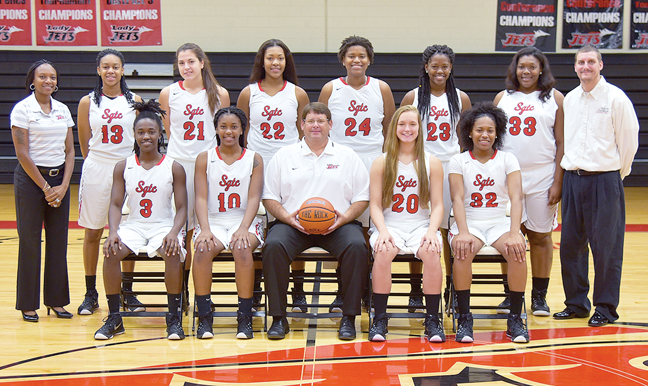 Submitted by South Georgia Technical College: Shown above are the 2015–2016 Lady Jets basketball team. The Lady Jets have climbed into the NJCAA poll with a no. 19 ranking in the nation. Seated on the front row are: Brittney Delva, Le’Deja James, head coach James Frey, Molly Brown, and Cierra Bond. On the back row are: Assistant Coach Kezia Conyers, Brook Burns, Claudia Perez, Mikaela Jones, Angela Tompkins, Kendra Green, Asia Smith and manager Jared Hampe. Not shown is Kayla Mallett of Australia.

SWAINSBORO – One hundred wins in less than four seasons is an awesome accomplishment, but that is not the statistic that South Georgia Technical College (SGTC) Lady Jets head coach, James Frey, is concentrating on as he prepares his number-19 ranked National Junior College Athletic Association’s (NJCAA) Division I squad for a match-up against Georgia Highlands College in Rome on Jan. 30.
A 62–33 victory on the road on Jan. 27 over East Georgia State College allowed the Lady Jets to remain in first place in the Georgia Collegiate Athletic Association Conference (GCAA) with a 10–1 record and put them at 20–4 overall.
That win also gave Coach Frey his 99th win as a head coach as well as his 99th victory at South Georgia Tech.
The Jets also made that long road trip to Swainsboro, but they were not as fortunate as the Lady Jets. They lost 65–61 to the East Georgia Bobcats to fall to 12–12 overall and 3-7 in the GCAA. The Jets will also travel to Georgia Highlands for a conference game against the number-two ranked men’s team in the nation.
“We have a huge road game Saturday against Georgia Highlands,” said Coach Frey. “A win Saturday would put us in pretty good position to win the GCAA regular season title and move us closer to being able to host the NJCAA Region XVII end of the season playoff tournament.”
Winning the GCAA regular season as well as the NJCAA Region XVII tournament, the District J tournament, and earning a spot in the NJCAA national tournament are all goals for the Lady Jets this season.
The 100th win in less than four seasons was not one that Coach Frey had thought about, but he said it would be nice, especially if it allowed the team to accomplish their overall goals of making it to the national tournament and playing for that national title. Coach Frey also said that he doesn’t expect it to be easy.
“Georgia Highlands is very talented and very well coached,” said Frey. “Coach Harrell will have them ready to play so we will have to bring our A+ game to win.”
Brandon Harrell started the women’s basketball program at South Georgia Tech and coached the Lady Jets until four years ago when he moved on to Georgia Highlands as their initial head coach of a new women’s program.
“Georgia Highlands will be a long road trip and we just came off a long rainy road trip to Swainsboro to play East Georgia College. We were lethargic at times against East Georgia but we came back and have played ourselves into a pretty good place. I am very pleased with the way the Lady Jets have matured on the floor. They are a fun bunch to coach.”
The Lady Jets trailed East Georgia 17–15 at the end of the first quarter, but came back and outscored them 13–2 in the second quarter to pull ahead 28–19 at the half. East Georgia came out strong in the third quarter and rallied to narrow the gap to 35-31, but the Lady ‘Canes remained persistent and stifled the comeback.
In the fourth quarter, SGTC outscored East Georgia 27–2 to put the game far out of reach and secure the 62-33 victory for SGTC.
Sophomore, Cierra Bond, led the Lady Jets in scoring with 24 points. Bond hit five of nine from the three-point line and had eight rebounds, three assists, and four steals. Freshman, Le’Deja James, was the only other player in double figures with 14 points.
Sophomore, Molly Brown, added nine points and shot three of six from the three-point line. Brittney Delva, Mikaela Jones, and Angela Tompkins each scored four points and Claudia Perez closed out the scoring with three. Delva also had 11 assists, five steals, and four rebounds. Tompkins, who saw limited playing time due to fouls, did foul out but managed to come up with six rebounds and two blocked shots in addition to her four points.
While the Lady Jets were taking care of business against East Georgia, the second-ranked Georgia Highlands team traveled to Albany to face the third-place Darton Lady Cavaliers. Darton upset Georgia Highlands 49–48 in a tight defensive game.
The loss left Georgia Highlands with an 8–2 conference record and pulled Darton up to 7–3 in the conference. Georgia Highlands and Darton both still have one more game against SGTC. The Lady Jets will host Darton on Feb. 3 at 5:30 p.m.
In the men’s game in Swainsboro, the Jets continued to struggle. The SGTC men fell to East Georgia 65–61 and slipped into eighth place in the GCAA with a 3–7 record. The Jets are currently 12–12 overall.
“We must fight to execute late in the game and score and we didn’t do that last night,” said Jets head coach, Travis Garrett. “I thought our energy was better than the previous games in the first half, but again we must sustain high effort for 40 minutes. Another key factor is that we fouled too much and put them at the free throw line. They converted and when we had opportunities at the foul line, we didn’t.”
Garrett was also upset about the team’s lack of successful lay-ups. “We have to make our lay-ups and, when we force turnovers, we must look ahead and pass the ball instead of dribbling. Right now, we just have to put this behind us and focus on Georgia Highlands on Saturday.”
The Jets trailed 35–32 at the end of the first half and, even though they attempted to close the gap, they lost the match 65–61.
Both teams will travel to Rome to face Georgia Highlands on Jan. 30. The Lady Jets will be in a battle for first place in the conference at 2:00 p.m., followed by the Jets, who will attempt to upset the number-two team in the nation when they face the Chargers at 4:00 p.m.