Montezuma Police Department to be recertified 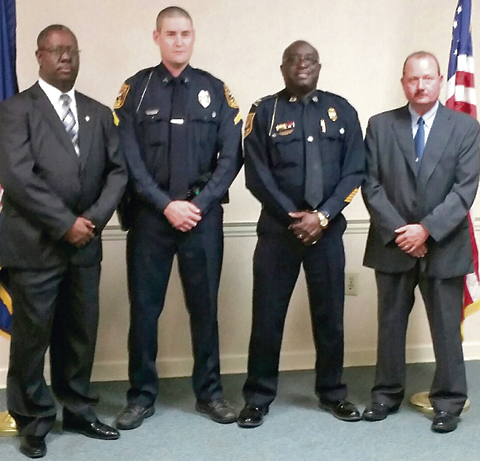 MONTEZUMA — Over the past year, the Montezuma Police Department has been preparing for its on-site visit which was held on Jan. 20-21 and the department passed with flying colors Montezuma’s newly elected Mayor Larry Smith asked the assessment team, which was the led by CALEA Assessor Karen Sanders of LaGrange Police Department, to put a grade on the on site and she advised a A-plus.
Police Chief Eric Finch said, “This is a big deal for the City of Montezuma and the Macon County community. I truly want to thank all my officers for their hard work and especially to our certification team consisting of Lt. Cedric Duncan our Certification manager, Capt. Charley Cannon and Cpl. Andrew Albertson. I truly believe the Department is ready for CALEA teir 1 status.”
Certification is a progressive and time-proven way of helping law enforcement agencies calculate and improve their overall performances. The foundation of certification lies in the promulgation of standards containing a clear statement of professional objectives. Participating agencies conduct a thorough self-analysis to determine how existing operations can be adapted to meet these objectives. When the procedures are in place, a team of trained assessors verifies that applicable standards have been successfully implemented. The process culminates with a decision by a joint executive committee that the agency has met the requirements for certification.
Certification status represents a significant professional achievement. Certification acknowledges the implementation of policies and procedures that are conceptually sound and operationally effective.
Benefits of certification include the following.
• Confirmation that agency practices are consistent with progressive professional standards.
• Greater operational and administrative effectiveness.
• Enhanced understanding of agency policies and practices.
• Greater public confidence in the agency.
• Recognition in the field of outstanding achievement.
• Reduced liability potential.
• Greater governmental and community support.
The Department was certifed in 2003, re-certified in 2006, 2009, 2012 and  2016. In 2004, the Department won the Dr. Curtis McClung Award of Excellence. Besides from the Department receiving awards, seven officers of the Montezuma Police Department has went on to become police chiefs within the State of Georgia. Chief Finch was nominated for Chief of Year in 2006, 2009, 2015, and in 2013 was invited to the White House to speak to Congress on policies changes.
Lt. Cedric Duncan was awarded the best Certification Manager in the State of Georgia in 2013. Cpl. Andrew Albertson, Officers Leigha Chavers and  Michael Ragsdale all received top honors at South Georgia Technical College law Enforcement Police Academy.
Finch said, “I truly want to thank our mayor and City Council for investing within our department.”