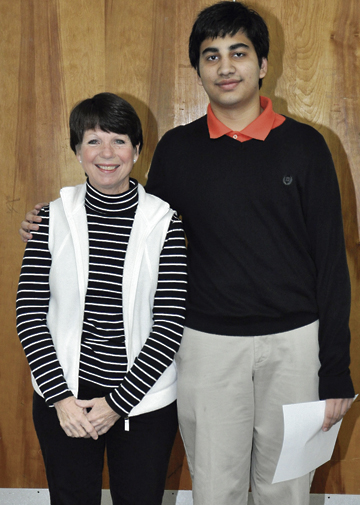 AMERICUS — Headmaster Ty Kinslow recently announced that Sahir Shahryar has been named Southland Academy’s STAR Student. He is the son of Mr. and Mrs. Jeff Lott of Americus and Humayun Shahryar of Dubai.
The Student Teacher Achievement Recognition (STAR) program was created to focus public attention on Georgia’s outstanding high school students and the teachers who have been most instrumental in their academic development. Each year a top academic senior in each participating Georgia high school is named the STAR student for that high school. To obtain the STAR nomination, students must have the highest score in one sitting on the three-part Scholastic Assessment Test (SAT), taken through the November test date of their senior year, and be in the top 10 percent or one of the top ten students of the class based on grade point average. Each high school STAR student is then asked to name a STAR teacher.
Shahryar named Donna Law, his Spanish teacher for three years, as his STAR teacher. In naming his choice, he said,” I think that [Spanish] could, if taught improperly, be very boring. But boring is the last word I’d choose to describe [Mrs. Law’s] classes.”
He went on to say, “Although [Spanish] is not particularly well-represented on the SAT, I am still extremely grateful for having been a student of [Mrs. Law].”

Montezuma Police Department to be recertified