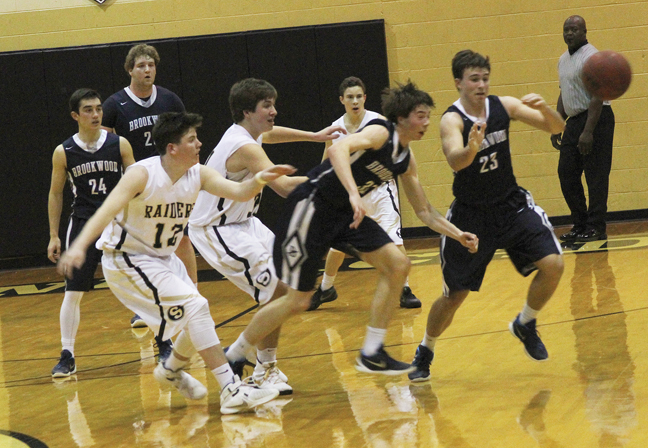 Michael Murray/Americus Times-Recorder: From left: Southland’s Chandler Studdard (12), Harrison Bell (31), and Brody Shattles (22) take their positions to defend the goal from Brookwood’s shooters. Bell led the Raiders to victory over Brookwood with 12 points in the match.

AMERICUS – The Southland Academy Raiders and Lady Raiders basketball teams had quite a productive evening on Jan. 29, earning a region 3-IAAA sweep of the visiting Brookwood Warriors and Lady Warriors.
The Lady Raiders kicked off the action, working towards a 36-23 thrashing of the Brookwood girls. Soon after, the Raiders took the floor to earn a 42-41 come from behind victory over the visiting foes.
Southland’s teams traveled to Perry the next afternoon to take on the Westfield Hornets and Lady Hornets. After a hard battle, the Raiders suffered a 67-45 loss to their 13-5 non-conference opponents. The Lady Raiders saw a similar fate in the early match-up, falling 28-21 to the Lady Hornets.
After this pair of match-ups, the Raiders are left with a 12-5 overall record on the season. The Raiders are currently 5-3 in region 3-IAAA.
The Lady Raiders jumped out early in the Jan. 29 contest, amassing a 15-8 lead over the first half.
Southland’s girls returned after the first half with the same energy, expanding their advantage to 13 points before the final buzzer. A free throw from Chris Shattles to open the half got the Lady Raiders going after the break. A perimeter shot by Kathleen Kinslow and a steal by Cassi Bass which she turned into a field goal kept the action going in the third frame and put the Lady Raiders in good position to secure the win.
The final frame was highlighted by back-to-back lay-ups from the hand of Macy Williams and a series of spot-on free throws by Sydney Payne and Bass to cinch the home victory for Southland’s girls.
Bass paced the Lady Raiders in the win, contributing 11 points and five steals to the Southland cause.
Williams and Shattles each tossed in five points, with Williams leading the team on the boards with six rebounds.
Payne, Kinslow, and Savannah Banks each added four points to the team’s final tally. Banks pulled down three rebounds and blocked two shots for Southland. Kinslow led the team in steals with five while Payne added another four.
When the Raiders took the court for the follow-up match, things initially looked grim for Southland. Brookwood came out strong, tossing in four points before Alex Roach broke the seal for the Raiders with a lay-up. The Warriors tacked on another four points before Harrison Bell connected on a Jamaal Rice-assisted trey to bring the Raiders back within three points of the lead. Despite another accurate three-pointer from Bell at the 45 second mark in the first, the Warriors managed to take a seven-point lead into the second frame.
With the Raiders down 15-8, Rice opened the second period’s scoring with a pair of shots from the charity stripe, sparking an 11-6 run for the home team. Landon Henson joined in the fun with a lay-up and a Roach-assisted three-pointer. Bell tossed in a perimeter shot and Parker Weldon got in on the action, converting a steal into a fast break lay-up to tie the score 19-19. With 15 seconds left on the clock, a Brookwood shooter connected on a short bucket to put the visitors up 21-19 heading into the second half.
The Raiders rode this momentum into the third period, as Henson opened the stanza with a long shot from beyond the arc to give the Raiders their first lead of the contest, 22-21. Rice added another point with a free throw before the Warriors neutralized the lead with a lay-up to tie the score again at 23-23.
The remainder of the match saw the score tied twice more, at 29-29 and 38-38 before Roach tossed in another free throw that would put the Raiders up for good with three minutes left to play. The Raiders continued to slowly but steadily pull ahead, with Rice and Roach drawing fouls to land them at the charity stripe, and eventually put the game out of reach.
A buzzer-beating three-pointer from a Brookwood shooter did nothing more than narrow a potential four-point win to a single point win and the Raiders completed the evening’s sweep at the game’s conclusion.
Bell honed in on a trio of shots from beyond the arch on his way to a team-high 12 points for the Raiders.
Roach and Henson followed close behind, each contributing eight points to the win. Weldon added another six points while Rice dished out a pair of assists and a pair of steals, tossing in another five points.
The Raiders and Lady Raiders return to action on Feb. 4, traveling to Thomasville for one final duel against Brookwood. Southland’s teams return to Americus on Jan. 9, hosting Deerfield-Windsor. 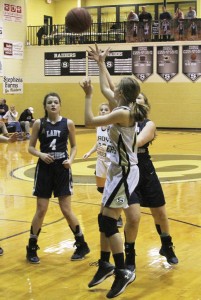