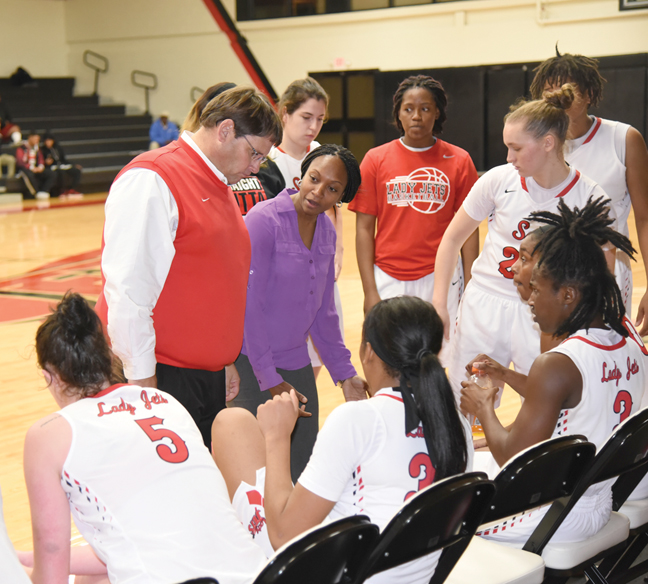 Submitted by South Georgia Technical College: James Frey, at left, addresses the Lady Jets during a tbreak in a match at the Hangar in Americus. The Lady Jets’ victory over Darton on Feb. 3 marks Frey’s 100th victory in four seasons.

AMERICUS – South Georgia Technical College (SGTC) Athletic Director and Lady Jets head coach, James Frey, recently accomplished something that many other coaches just dream about. With the Lady Jets’ Feb. 3 victory over Darton, Frey was able to secure his 100th win as a collegiate head coach and reached that plateau in less than four full seasons.
That win also allowed the nationally ranked SGTC Lady Jets to remain in first place in the Georgia Collegiate Athletic Association (GCAA) standings.
“The 100 wins is something that when I was an assistant coach, I didn’t really think about much,” laughed Frey, who worked as an assistant coach for nearly 20 years at Coastal Georgia College before coming to Americus to serve as the head women’s basketball coach. “I am very honored and humbled. A lot of the credit goes to the players who have been a part of this program and who have helped me get to this position. I also have to thank assistant coach Kezia Conyers who has been with me three of the four seasons and who has played a tremendous role in our teams reaching the national tournament the last two years. Last but certainly not least is the South Georgia Technical College administration and faculty and staff for establishing and supporting a top notch athletic program.”
Coach Frey and the Lady Jets are now 11–2 in the conference and 21–5 overall. Frey posted a 20-2 record in his first year as the Lady Jets head coach and made it to the final four in the NJCAA Region XVII tournament. The second year, the Lady Jets won the conference title, the NJCAA Region XVII tournament, and the District J title game to advance to the NJCAA National tournament. They finished that year with the best record in the history of Jets or Lady Jets basketball with a 30–5 overall performance.
Last season, the Lady Jets almost tied that effort. They finished second in the conference but won the NJCAA Region XVII tournament, District J title, and earned their second consecutive trip to the national tournament. They completed the year with a 29–8 record, the team’s first ever victory at the national tournament, and were ranked in the elite eight nationally.
The win against Darton put Frey over the 100-win mark in less than four seasons. The Lady Jets had the opportunity to secure that 100th win on Jan. 30 at Georgia Highlands College, but the second ranked Lady Chargers walked away with a 69-59 victory in Rome.
“In a way, it is pretty cool that the 100th win came against Darton,” said Frey. “My first win as a head coach was at Darton during the Darton Classic and now my 100th win was against Darton. Obviously, I would have liked to have won the Georgia Highlands game but it was good to get this win in our home gym.”
The Lady Jets wound up with the victory but the outcome was anything but assured when the game began. The Lady Jets trailed 15–6 at the end of the first quarter, but rallied in the second quarter to outscore Darton 24–10 and take a 30–25 lead at the half.
South Georgia Tech was able to hang on to that lead and expand it slightly by outscoring the Lady Cavaliers 18–16 in the third quarter and 19–17 in the fourth to capture the 67-58 win.
Sophomore guard, Cierra Bond, was the leading scorer for the Lady Jets with 16 points, including a trio of three-pointers. Sophomore, Angela Tompkins, added 14 points and 10 rebounds while freshman, La’Deja James, had a big game with 12 points, six rebounds, two assists, and four steals. Sophomore, Molly Brown, closed out the double digit scoring, draining three shots from beyond the arc on her way to 11 points, two assists and one steal.
Sophomore point guard, Brittney Delva, added seven points, five rebounds, three assists and one steal. Mikaela Jones tossed in six points and Kendra Green scored one point. Freshman, Kayla Mallett, from Australia who just graduated from high school in November and joined the team this semester, made her first start in an American college basketball game and had five rebounds, one blocked shot and one steal.
After the exciting women’s victory, the Jets faced off against Gordon State College and lost their fourth straight in a 55–47 decision. The Jets fell behind by as many as 12 points in the first half and were down 36–28 at half time. They matched Gordon bucket for bucket in the second half with 19 points each to make it a 55–47 game.
Three Jets hit double figures in the contest.
Jalen Mitchell led the way with 12 points, Corbyn Jackson added 11, and Rico Simmons followed with 10 points. Clarence Smith tossed in four points while Keyshawn Baker and Pat Welch had three points each. Matt McMorris and Demario Beck each contributed two points.
The Jets are currently in eighth place in the conference with a 3–9 GCAA record and a 12–14 overall performance.
Both the Jets and the Lady Jets will travel to Reinhardt University in Waleska to take on Chattahoochee Tech on Feb. 5. They will be on the road again to Atlanta Metro on Feb. 13.
The Lady Jets will then host Chattanooga State Community College on Feb. 15 at 6:00 p.m.. Both teams will host Albany State on Feb. 17 at 5:30 and 7:30 p.m. for sophomore night. 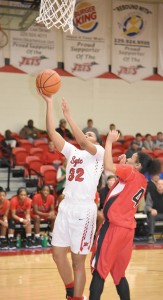