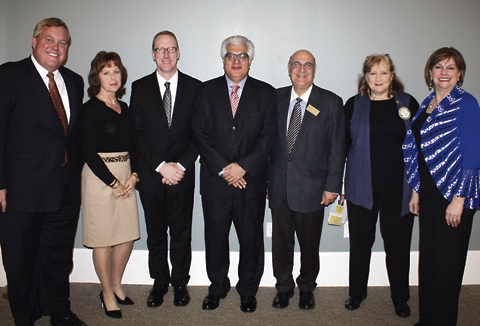 AMERICUS — While Georgia can expect to continue a mild economic growth rate this year, the trend of the past two years, job growth will slow, according to Rajeev Dhawan, Ph. D., director of the Economic Forecasting Center at the Robinson College of Business at Georgia State University, Atlanta.
Speaking at the 2016 Economic Outlook luncheon Tuesday, the 21st in the series, co-sponsored by the Center for Business and Economic Development at Georgia Southwestern State University (GSW) and the Americus Rotary Club, Dhawan focused on national and state economics. He predicts the nation can expect a modest GPD growth of 2.5 percent and will average only a 2 percent rise in employment this year.
Gaynor Cheokas, Ph.D., director of GSW’s Center for Business and Economic Development, chaired the event and welcomed the large crowd of local Rotarians, GSW faculty and staff, and business community gathered in the university’s faculty dining room.
GSW Interim President Charles Patterson, Ph. D., extended warm greetings, stating he visions the university will play an important role in being an economic driver.
Dhawan, introduced by Rita Rowell, executive director of the GSW Foundation, drew a picture of how the U.S. philosophy of economic forecasting relates to the global economy through an interesting and enlightening power point presentation illustrated with global, national and Georgia statistics and data.
“Understanding the global economy and how it relates to U.S. markets is important,” said Dhawan. “What happens in Australia and China has an effect on our national economy and well as the economy in the state. China has become an important player in world trade, along with the shift in the oil market since 2010.”
He pointed out other areas critical to the economy: the performance of the bond market and stock market, import and export to countries outside the U.S., especially exports to China’s manufacturing industry that has grown extensively and politics.
“If the economy grows, the consumer buys,” said Dhawan. “People will continue in the post-recession spending style and remain cautious about buying.”
Automobile manufacturers are using creative marketing techniques and long-term, appealing financing, but the consumer continues to restrain from spending. This trend also holds true for other big ticket items.
Georgia’s 2016 growth stems in part from projects already underway and in the continued recovery of the housing market. Dhawan’s Power Point illustrated commercial and residential housing construction is on the rise across the metropolitan region of Atlanta from Alpharetta to midtown. In midtown alone new residential construction is phenomenal, and continues with more than 3,000 units being built and almost 5,000 more planned.
Following the formal presentation, the economist engaged in a question and answer session. Responding to an inquiry about what students should do to succeed after graduation, Dhawan advised to specialize in one area and learn basic issues of technology and don’t make the mistake of over extending areas of learning.
“The philosophy of being ‘Jack of all trades’ doesn’t work anymore,” said Dhawan. “Don’t emulate the mores of the upper class — you can’t stop progression.”