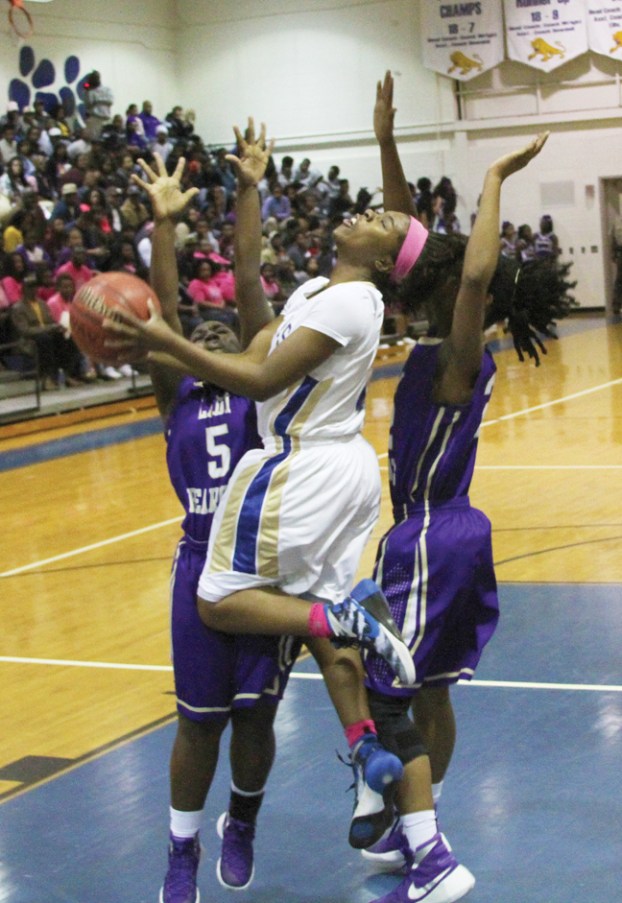 Michael Murray/Americus Times-Recorder: ASHS’ Atyanna Gaulden takes a shot from under the basket during the Lady Panthers’ final region test of the regular season against Bainbridge on Feb. 5.

AMERICUS – The Americus-Sumter High School (ASHS) Panthers and Lady Panthers wrapped up their regular season over the weekend with a two-night home stand in Americus. On Feb. 5, ASHS’ boys and girls took on the Bainbridge Bearcats and Lady Bearcats before returning to their home court the next afternoon to battle Lee County.
The Lady Panthers opened the action on Feb. 5, blowing away the visiting Lady Bearcats in their final region match of the regular season by a 68-28 margin. The Lady Panthers built up an 18-4 lead early in the match and continued to press forward throughout the remainder of the contest.
Propelled by a series of long three-pointers from Jykiera Long, several breakaway lay-ups from Atyanna Gaulden, and exciting performances from Kayla Howard and Timia Swanson, the Lady Panthers sealed the victory and completed their regular-season region competition with an untarnished record after 13 games.
The ASHS girls continued this momentum the following afternoon to earn one more 55-43 victory over Lee County and solidify the top spot in region 4-AAAA with a 23-1 overall record.
As the number-one seed in the region playoffs, the Lady Panthers defended their impressive record on Feb. 9 in Americus, facing the Cairo Lady Syrupmakers who defeated Dougherty County to move forward on Feb. 8. The results of this match were not available at press time.
The region championship match is scheduled to be played on Feb. 12 in Americus at 7:00 p.m.
The Panthers got off to a rough start as they kicked off the weekend’s action on Feb. 5. The Bearcats came out strong in the contest, and made a hard defensive push to hold the Panthers to only seven points in the first quarter. The visitors kept up the pace in the second, allowing only one lay-up from Scottie Sheffield, assisted by Eric Brown and a free throw from Kiante Sims.
The Panthers’ 31-10 deficit at the half eventually sentenced the team to a 57-40 loss despite the ASHS boys outscoring their opponents 20-14 in the third frame.
The Panthers returned to the court on Feb. 6, taking on the Lee County Trojans in their final non-region test. After another hard-fought battle, the Panthers capped off their regular season with a 55-46 win.
Fred Bryant and Eric Hall led the charge for the Panthers with 14 and 11 points, respectively, in the season closer. Josh Lusane followed close behind, contributing eight points to the win while Sims tossed in seven. Ben Walters dished out three assists and contributed one block for the Panther cause.
With their 8-5 record in region 4-AAAA, the Panthers secured the number-four seed in the division playoffs and returned to the court on Feb. 9, traveling to Albany to take on the Westover Patriots. The results of this match were not available at press time.
The division championship match is scheduled to be held in Americus on Feb. 12 at 8:30 p.m. 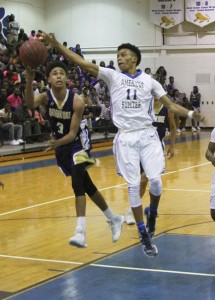 Michael Murray/Americus Times-Recorder:
Eric Hall leaps up to block a Bainbridge shooter during the Panthers’ Feb. 5 contest in Americus. Hall led the Panthers to victory against Lee County on Feb. 6 with 16 points.

From STAFF REPORTS ATLANTA – On Jan. 26, the Schley County Baseball Team traveled to the Georgia State Capitol in... read more