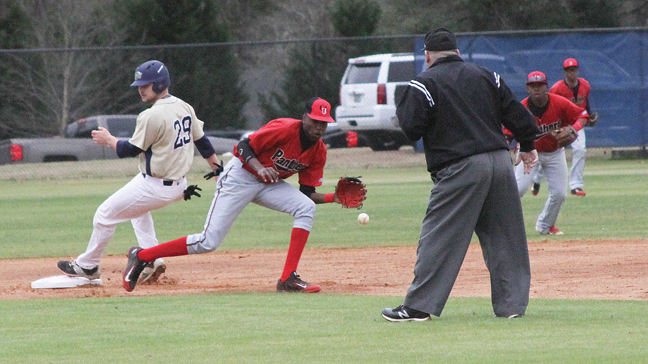 Michael Murray/Americus Times-Recorder: GSW’s Dakota Long beats the tag as he steals second base during the first inning of the ‘Canes season opener on Feb. 6. Long batted in two RBIs during that match.

AMERICUS – The Georgia Southwestern baseball team completed a three-game series sweep of Clark Atlanta University with a convincing 10-0 win on Feb. 7 at Hurricane Stadium. The Hurricanes’ home opener series saw the GSW men grab a pair of wins (7-4 and 12-1) on Feb. 6 before closing the series the next afternoon with the shutout victory.
GSW improved its record to 4-0, marking the program’s best start since joining the NCAA ranks in 2006-07. Clark Atlanta fell to 1-3.
Evan Alderman set the pace for the Canes in the first test of the series, bringing in a pair of RBIs on his two hits. Alderman also crossed the plate twice. Dakota Long brought in two RBIs on two hits as well.
Pitcher, Earl Dupree started on the mound for the ‘Canes, striking out eight batters in five innings of work. Justin Barnes  and Kyle Spinks wrapped up the win for the Hurricanes with two and three strikeouts, respectively.
In the evening’s nightcap, Brandon Weaver, Will Redding, and Davey King each batted in a pair of RBIs to contribute to the win. King, Brett Burgess, and Alex Kranick each crossed the plate twice.
GSW Pitcher, Jordan McilWain is credited with the win after a seven-strikeout performance.
Every player in the Hurricanes batting order picked up at least one hit in the series finale on Sunday. On the defensive side, four pitchers combined to hold Clark Atlanta to one hit, a bloop single to left field in the fifth inning.
The Hurricanes scored all the runs they would need in the second behind a two-run double from Zach Barron and a two-run triple by Alderman. GSW scored five runs in the frame and led 5-0 until the sixth inning.
Kranick hit the second of his two sacrifice flies in the game in the sixth inning to bring home Alderman, who opened the inning with a walk and later advanced two bases on a wild pitch.
GSW put the finishing touches on the Panthers in the seventh with four runs, including RBI-doubles by Kranick and Redding.
Brett Burgess and Jared Jones finished with two hits apiece to lead GSW. Kranick and Barron turned in three-RBI performances.
GSW starting pitcher, Layne Gusler, (1-0) threw three innings in his first appearance of the spring, did not allow a hit, walked two and struck out five. The Hurricanes entered the game with the plan of using multiple pitchers while keeping pitch counts low. Michael Ranieri struck out two in his two innings of work. Mitch Holloway and Chad Adkins split the final two frames.
Starter Joseph Holmes II (0-1) is charged with the loss for Clark Atlanta after surrendering five runs in two innings on the hill. He walked four and allowed four hits.
GSW travels to Middle Georgia State on Feb. 10 for a 5:00 p.m. game. 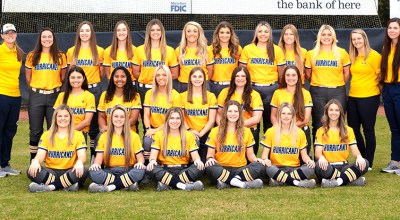