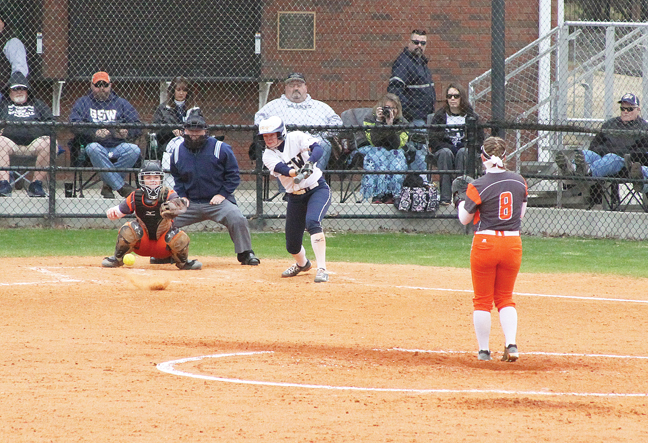 Michael Murray/Americus Times-Recorder: GSW’s Haley Goodson knocks a grounder down the first base line during the Lady ‘Canes’ Feb. 6 contest in Americus. Goodson pitched the winning game for GSW in the season opener.

AMERICUS – The Georgia Southwestern State University Lady Hurricanes softball team kicked off their season on Feb. 6 in Americus, taking on the Tusculum College Lady Pioneers of Greenville, TN in a two-game series.
The Lady ‘Canes split in the double-header to start the season off with a 1-1 record at Lady ‘Canes Field.
GSW won the first match of the afternoon by a 6-2 margin.
Tusculum took a 2-0 lead at the top of the second inning when Robin Stoner singled and then advanced to second on a pass ball. Stoner then moved to third when Eliza Davis walked and scored off a single from Miranda Beeler. Davis then scored off a wild pitch.
GSW’s Erin Steele put the Lady ‘Canes on the scoreboard in the bottom of the third after she got on first off a bunt, stole second, and went home off a single from Mikela Barlow.
Barlow scored in the fifth inning after singling to left field, stealing second and headed home on a wild pitch.
The Lady ‘Canes felt the pressure heading into the bottom of the sixth inning with the score tied 2-2 in the season opener.
Steele singled and then stole second. She then advanced to third off a single from Brittany Davis and scored off a bunt from Barlow. Davis scored off a single from Lacy Striblin and Barlow scored off a sacrifice fly from Allee Denny.
GSW’s defense held off the Lady Pioneers to take the a 6-2 victory and finish with ten hits, six runs, and four RBIs.
GSW’s Haley Goodson (1-0) is credited with the win after having pitched seven innings. Goodson gave up five hits and two runs. She walked three batters and struck out three more. The afternoon’s nightcap did not fare quite as well for the Lady ‘Canes. Tusculum began to gain momentum late in the game to sentence the Lady ‘Canes to a 7-2 loss in the second match of the afternoon.
The Lady ‘Canes jumped out early, gaining a 1-0 lead in the second inning when Haley Warner scored off a single from Graysen Sanders.
Tusculum went on to spark a rally two innings later, scoring two in the fourth and two more in the fifth to take a three run lead.
GSW cut the lead to one run when Davis and Barlow scored in the bottom of the fifth.
Late in the sixth frame, the Lady Pioneers managed to put a pair of runners on base with two outs. Stoner singled and advanced to second on the throw, sending both base runners across the plate. Bailey Culler then reached first on an error as Stoner advanced to third. Emily Hester then proceeded to single to center field, sending Stoner home.
The Lady ‘Canes finished with five hits, three runs, three RBIs and two errors.
Brittany Childs (0-1) is charged with the loss for GSW after pitching five innings, giving up seven hits, and allowing four runs. Childs walked four batters and struck out three.
Savannah Carlisle pitched one inning, giving up six hits and three runs. Goodson pitched one inning.
The Lady ‘Canes travel to Carrolton on Feb. 14 for a double-header against West Georgia.