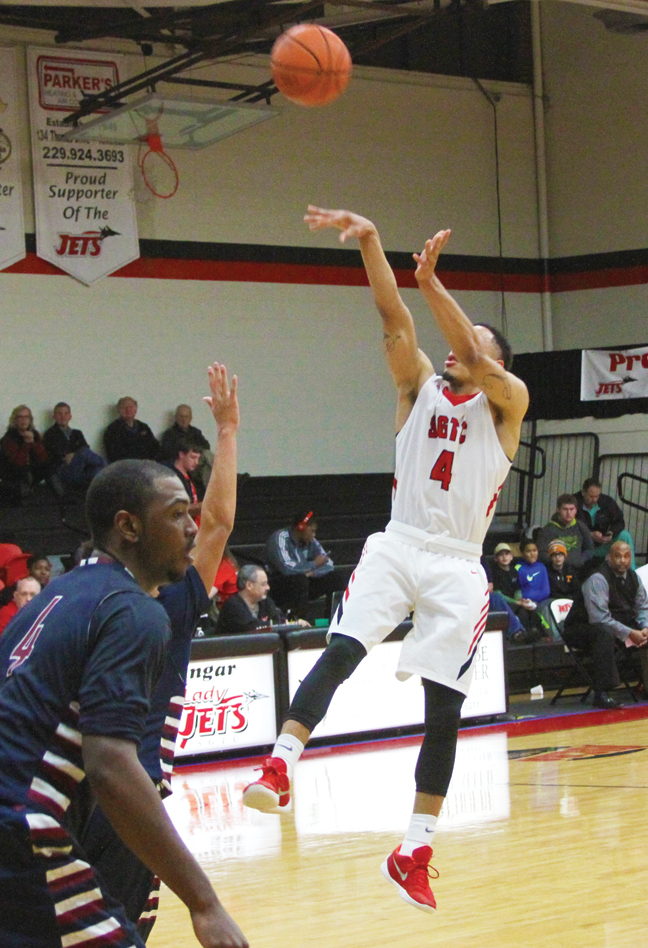 Michael Murray/Americus Times-Recorder: SGTC’s Clarence Smith takes a long jumper during a Jan. 23 contest in Americus. Smith contributed 19 points to the Jets’ upset of the Golden Eagles on Feb. 6.

WALESKA – The South Georgia Technical College (SGTC) Jets defeated fourth-ranked Chattahoochee Technical College 95–93 in double-overtime at Reinhart College in Waleska on Feb. 6 and the Lady Jets continued their winning ways with a 96-49 victory over the Lady Golden Eagles in the Georgia Collegiate Athletic Association conference double-header.
Jets head coach, Travis Garrett, said this was a good win for the Jets. The victory snapped a four-game losing streak for the Jets and put them at 4–9 in the conference and 13–14 overall. Of the Jets’ nine conference losses, most have been by three points or less and only one was by a margin of 10 points.
“We have played a lot of close games and I am so glad that we came out on the winning side of this one,” said Garrett after the match. “Our players did a great job to pull this off and we are hoping that this is the turnaround that we needed heading into the end of the season playoffs.”
The Jets were up 31–30 at the end of the first half, but Chattahoochee Tech staged a comeback effort to tie the game at 71–71 by the end of regulation time. Both teams scored 12 points in the first extra period to remain tied at 83-83. In the second overtime round, the Jets outscored the Golden Eagles 12–10 to narrowly slip past their hosts and secure the 95–93 victory.
Freshman, Rico Simmons, came off the bench to the lead the Jets in scoring with 21 points. Simmons hit six of 14 shots from the field and nine of 10 from the free throw line. Sophomore, Clarence Smith, contributed 19 points. Jalen Mitchell tossed in another 15 points and Keyshawn Baker closed out the Jets’ double-figure scoring with 11.
In the opening half of the conference double-header, the Lady Jets rolled to a 96–49 victory over the Lady Eagles. SGTC was up 22–11 at the end of the first quarter and, by the half-time break, had built up a 50-20 cushion. The Lady Jets continued to outscore the Lady Golden Eagles, 27–13 in the third quarter and 17–16 in the final frame to seal the win.
The Lady Jets are currently ranked first in the GCAA conference with a 12–2 record.  Georgia Highlands is in second place at 11–2. The two teams split in head to head competition this season. Darton is currently in third place with a 9–4 record and Atlanta Metro upset Central Georgia on Feb. 6 to move into fourth place with a 7–4 record. Central Georgia Tech is now fifth with a 7–5 conference record.
Lady Jets forward, Angela Tompkins, led the team in scoring as she earned a double double with 28 points and 19 rebounds. Claudia Perez came off the bench to add another 16 points. Le’Deja James earned a double double in the match as well, accounting for 12 points and 10 assists.
Molly Brown and Cierra Bond each added 11 points and Brook Burns closed out the double digit scoring with 10 points.
The Jets and Lady Jets are both off this week, returning to action when they travel to Atlanta to face Atlanta Metro in a conference doubleheader on Feb. 13.
The Lady Jets will host Chattanooga State at home on Feb. 15 at 6:00 p.m.
Both teams will then host Albany Technical College for sophomore night on Feb. 17 at 5:30 and 7:30 p.m.
That match will mark the end of the  regular season for the Lady Jets who will start tournament play on Feb. 23.