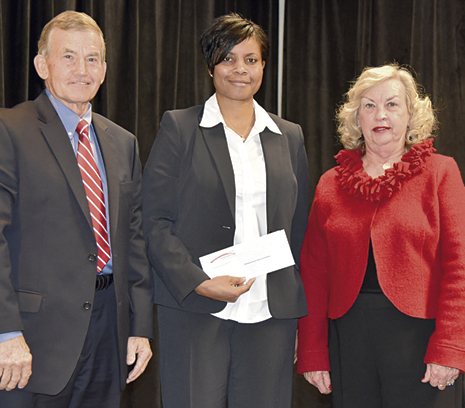 South Georgia Technical College President Emeritus Sparky Reeves, at left, and wife Allene, at right, are shown with the SGTC 2016 Instructor of the Year Andrea Ingram.

AMERICUS — South Georgia Technical College (SGTC) President Emeritus Sparky Reeves and his wife Allene recognized SGTC’s 2016 Rick Perkins Instructor of the Year Andrea Ingram and the college’s 2016 Georgia Occupational Award of Leadership (GOAL) winner Ashley Rodgers recently with gifts from the Sparky and Allene Reeves endowed fund.
The Reeveses endowed this special fund with the SGTC Foundation in 2010, and have been growing the fund for the past six years in order to be able to recognize the outstanding instructor and top student at South Georgia Technical College each year. Ingram received a $500 stipend and Rodgers was presented with a framed certificate and a $500 scholarship to be used towards tuition, fees, and supplies at the college.
“We established this endowed fund as a way to give back annually to the top student and the top instructor at South Georgia Technical College,” said the Reeveses. “South Georgia Tech has been an important part of our lives for the past 42 years and we both recognized how important the instructors as well as the students are not only to the college but to the community.”
Sparky Reeves joined the South Georgia Tech faculty in 1973, as an accounting, math, and business psychology instructor.  During his years as an instructor, he worked with the GOAL program and had several students win the GOAL nomination for the college. First as an instructor and then during his tenure as a supervisor, evening coordinator, vice president of Economic Development and president, he continued to see how important outstanding instructors and students were to the overall success of the college and the communities in its service area.
“If the instructors are the heartbeat of the college, then the students are the lifeblood,” said Reeves, who added that it is important to have both operating efficiently to have a healthy body or college.
“Allene and I are so very pleased to be here today to present computer information systems instructor Andrea Ingram with a $500 check for being nominated and selected as the 2016 South Georgia Technical College Instructor of the Year,” said Reeves at the Instructor of the Year banquet recently where Ingram was spotlighted in front of her peers.
Sparky and Allene Reeves returned to the college two weeks later to present the Ashley Rodgers, the college’s 2016 GOAL winner, with a $500 scholarship for her selection as the top student at the 2016 GOAL luncheon.
Both Ingram and Rodgers will now represent SGTC at regional and state competition in an effort to be selected as the top instructor and student within the Technical College System of Georgia.
The Reeveses plan to recognize the outstanding instructor and student from SGTC annually from the earnings and interest produced from the Sparky and Allene Reeves endowment fund with the SGTC Foundation.
“On behalf of South Georgia Technical College I would like to thank President Emeritus Sparky and Allene Reeves for this stipend and scholarship,” said SGTC Acting President Janice Davis.  “President Reeves and Allene have been special to South Georgia Tech for many years and today they demonstrated again by their continued support of the college’s educational opportunities why they mean so much to the college, its faculty, staff, and students,” added Davis.
“I would like to thank President Reeves and Allene for their continued support of the South Georgia Technical College Foundation,” said SGTC Foundation Executive Director Su Ann Bird, who also serves as vice president of Institutional Advancement. “They have both seen how important the foundation and its supporters are to the success of the college and they are continuing to give so that others can explore educational opportunities at South Georgia Technical College.”
For more information about making a donation or establishing an endowed scholarship at SGTC, contact Su Ann Bird at 229-931-2011 or sbird@southgatech.edu
Tax deductible donations may also be mailed to the SGTC Foundation, P.O. Box 6102, Americus GA 31709. 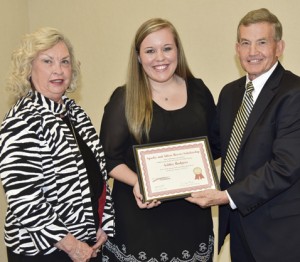