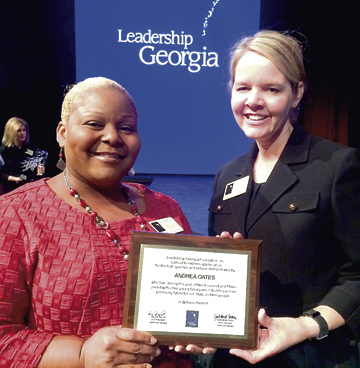 ATLANTA — Andrea Oates, Ed.D., Academic Dean for South Georgia Technical College and the Plains City Council, graduated in the 2015 Class of Leadership Georgia recently.
Leadership Georgia (LGA) is a prestigious 43-year-old organization of community and state leaders. Affiliated with the Georgia Chamber of Commerce, Leadership Georgia trains and builds a network of emerging young leaders from across the state. Past participants include a number of influential state and national leaders ranging from former U.S. Sen. Sam Nunn to former University of Georgia Athletic Director Vince Dooley.
Sixty three participants are selected each year from a pool of several hundred applicants. Class members visit five Georgia communities in a year-long exchange of ideas and experiences about important issues affecting the state.
The 2015 Class of Leadership Georgia was led by Program President Vann Parrott and under the leadership of Program Chair Gretchen Corbin. With a principal focus on “Georgia on the Rise” this class travelled to Brasstown Valley, Thomasville, Jekyll Island, Statesboro and Atlanta. In each city, the class focused on various aspects of Georgia’s economic development, including agriculture, technology and film, tourism. The culmination of the program included a reception with Governor Nathan Deal at the Governor’s Mansion.

Question: What exactly is a “hard freeze?” I heard that some plants will tolerate a frost but not a hard... read more