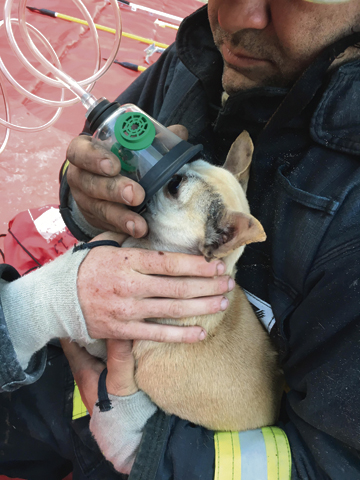 Firefighters give oxygen to one of the dogs rescued from a mobile home fire Thursday on Tallent Store Road.

AMERICUS — Sumter County Fire & Rescue was called to a mobile home fire Thursday morning in rural Sumter County.
Sumter County Fire Chief John Ekaitis said the call was received at 6:53 a.m. to respond to 491 Tallent Store Road for the report of a structure fire.
The fire department arrived on the scene within five minutes and found a fire in the living room of the double-wide mobile home. All occupants were out of the residence, the chief said.
“The firefighters made an aggressive attack on the fire and they were advised of some dogs still in the residence,” Ekaitis said. “Other firefighters started a search and found the dogs and removed them from the residence.”
Ekaitis said one of the dogs required oxygen treatment and the firefighters provided that treatment with their onboard pet oxygen masks. The dog was treated and released to the owners.
The fire chief said the fire was under control within 10 minutes and is still under investigation. 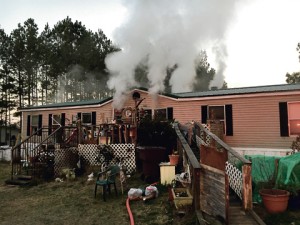