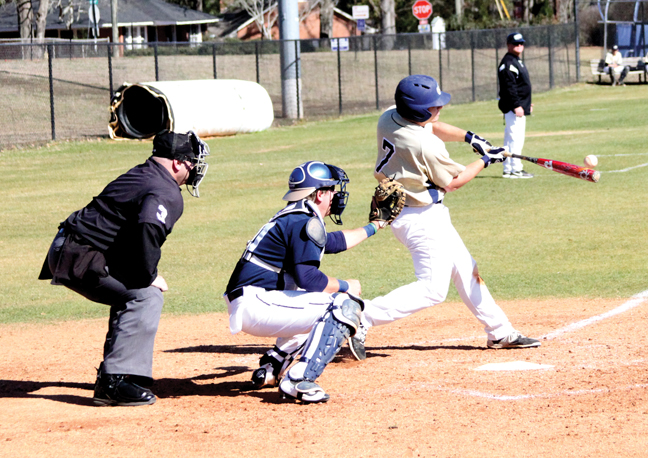 Michael Murray/Americus Times-Recorder: GSW’s Jared Jones connects with a fastball during the fifth inning of the Hurricanes’ series opener against the Montreat Cavaliers on Feb. 13 in Americus

AMERICUS – The Georgia Southwestern (GSW) baseball team swept a non-conference doubleheader against Montreat College on the afternoon of Feb. 13 at Hurricane Stadium before returning to the diamond the next afternoon for a contest against the same team. A seven-run sixth inning blew open the Valentine’s Day series finale for the ‘Canes as the they defeated Montreat 15-7.
The trio of wins leaves the Hurricanes with an 8-0 record so far on the season. This marks the first time that GSW has been undefeated through eight games since joining the NCAA in 2006-07. Montreat dropped to 0-6.
The Hurricanes won the first match of the weekend by a margin of 8-3.
GSW hurlers racked up a season-high 15 strikeouts in the series opener.
The ‘Canes jumped on Montreat with a pair of runs in the second inning, added two more in the third and another two in the fifth.
Southwestern starting pitcher Earl Dupree (2-0) exited after six innings with a 7-0 lead. Dupree held the Cavaliers to two hits and struck out nine batters.
GSW got at least one hit from seven of the nine starters in its batting order. Devyn Newberry, Brett Burgess and Davey King had two hits apiece. King belted a two-run double. Burgess legged out a triple in the fifth.
Michael Ranieri allowed all three Montreat runs in the seventh inning. Coty Graham calmly fanned all six batters he faced.
Montreat starter, Jacob Veliz (0-1), went four and two thirds innings, allowed six hits and three earned runs, walked three and struck out three.
The Hurricanes rode this momentum to a 3-0 shutout of the visiting Cavaliers in the second match of the evening.
GSW starting pitcher, Jordan McIlwain, kept Montreat in check in the nightcap by throwing six scoreless innings of two hit-balls. McIlwain walked two batters and struck out eight.
Alex Kranick drove home the game-winning run in the third inning with a double to deep center field that scored Newberry. Kranick scored on the next play when Dakota Long singled to left field.
Newberry added an insurance run in the fourth stanza with a sacrifice fly.
Kranick was the only batter in game two to have multiple hits. He was two-for-four with an RBI and one run scored.
Mitch Holloway threw a scoreless seventh to pick up his first save of the spring.
Montreat starter, Daniel Collins, (0-2) faced 24 batters in five innings of work and surrendered two earned runs while holding the Hurricanes to four hits. Collins walked four and struck out six.
Montreat returned to the diamond the next afternoon prepared to turn the tables on the Hurricanes.
After falling behind 2-0, GSW rallied for six runs in the third inning. Evan Alderman put the Hurricanes on the board with a RBI single that scored Will Redding. Alderman and Newberry then scored on the next play as Kranick drilled a shot into the left field corner for at two-run double.
Brett Burgess collected an RBI on a well-placed bunt between the mound and first base before King plated Long with a double down the right-field line.
Montreat pushed across three runs in the fifth inning and tied the game in the top half of the sixth with the help of two GSW throwing errors.
The Cavaliers’ defense returned the favor in the bottom half of the inning as four errors helped the Hurricanes score seven runs and put the game out of reach. Zach Barron collected two hits in the inning as the Hurricanes made their way through the batting order.
Barron finished three-for-five at the plate with a double, one RBI, and one run scored. Krannick went two-for-five with a double, four RBIs, and two runs scored. Alderman, Long, Burgess and King each collected two hits. Burgess and Alderman had two RBIs apiece.
Grayson Snipes led Montreat at the plate with a four-for-five performance. Stephen Adams added three hits. Chase Day drove in three.
GSW used four different pitchers in the game. Starter, Layne Gusler, did not factor into the decision. Gusler threw four and one third innings, walked four batters, and struck out four. He surrendered six hits and three earned runs.
Reliever, Chad Adkins, (1-0) picked up his first win of the season after throwing two and two thirds innings. Adkins allowed two hits and was charged with one unearned run.
Jarrod Crum threw an inning of scoreless relief. Drew Powers covered the ninth.
Montreat starting pitcher, John Cassandra, tossed three and one third innings, allowing five earned runs and four hits. Kyle Nyenhuis (0-1) was the unfortunate victim of four errors in the sixth inning and was tagged with seven unearned runs. Braeden Daniels gave up two runs during his two innings on the hill.
Southwestern traveled to Thomasville on Feb. 16 for a non-conference game against Thomas University at 5:00 p.m. The results of this match were not available at press time.
The Hurricanes return to the diamond on Feb. 20, hosting conference opponents, the University of North Georgia Nighthawks, for another three-game series.