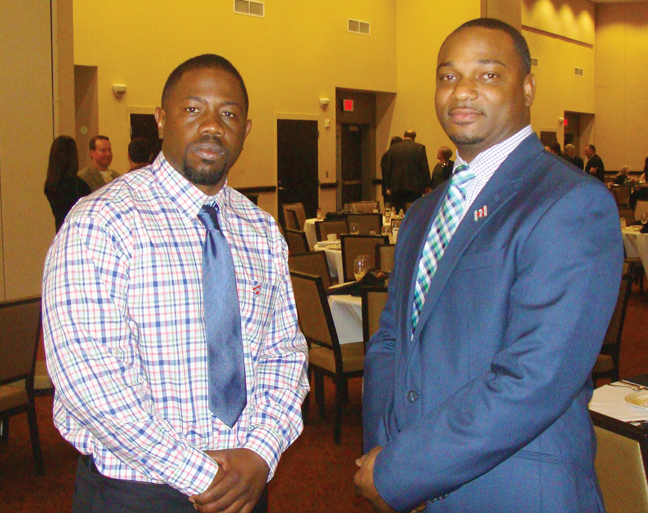 Submitted by Marcus Johnson: Terry and Robinson stop for a photograph during the reception for the VSU Hall of Fame inductees on Feb. 13. Both Americus natives were inducted into the Hall of Fame for their roles on Valdosta State University’s national championship team.

VALDOSTA – A pair of Americus natives, Michael Terry, and Rashawn Robinson, recently received the honor of an induction of their 2007 National Championship Team to the Valdosta State University (VSU) Athletic Hall of Fame.
Both Terry and Robinson won state titles with the  Americus High School Panthers before going to VSU, where they led the Blazers to a 14-1 record and the school’s second national title.
Both players were instrumental in the succeses of both the Americus High School Panthers and the VSU Blazers during their tenures at the institutions.
With the Panthers, both players were named All-State athletes.
Terry received the honor in 2002 after leading the region in rushing with over 2,000 yards.
Robinson was awarded the distinction in the 2003 season, after leading the region in regular-season rushing with a total of 1,191 yards and 19 touchdowns.
In their college careers, the teammates helped propel the VSU Blazers to a national title in 2007.
On the game winning drive in the national title game, Robinson made a crucial catch and Terry scored the game-winning touchdown with only seconds to go.