Barron belts grand slam for GSW in win over Thomas 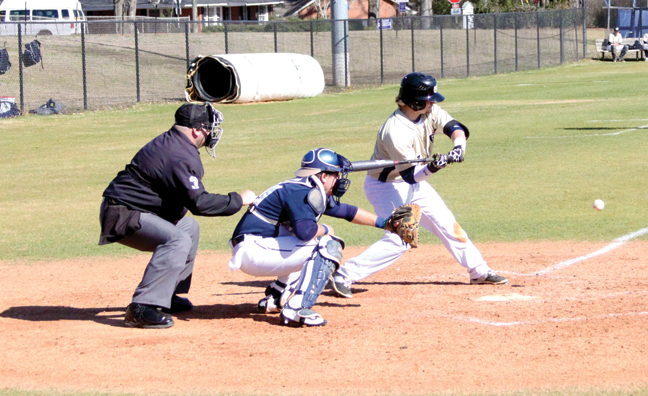 Michael Murray/Americus Times-Recorder: GSW’s Zach Barron takes a swing at a fastball during the ‘Canes’ Feb. 13 match against Montreat in Americus. Barron led the Hurricanes to victory over Thomas University with a grand slam on Feb. 16 in Thomasville.

THOMASVILLE – Zach Barron finished his three-for-four day at the plate with a grand slam to put an early end to the hurricanes’ Feb. 16 game at Varnedoe Stadium as Georgia Southwestern defeated Thomas University, 13-2, in seven innings.
GSW improved its record to 9-0, marking the program’s best start since joining the NCAA ranks in 2006-07. Thomas fell to 3-7.
Big innings were the story of afternoon as GSW collected four runs in the second, five in the fifth and four more in the seventh on the Barron blast.
The Hurricanes scored all the runs they would need to win the game in the second inning, highlighted by a two-run single from Evan Alderman.
After Thomas pushed across two runs in the fourth (with the aid of two GSW errors) to pull within two, the Hurricanes picked up RBI singles in the fifth from Will Redding and Brandon Weaver before Barron delivered a two-run double and later scored on a passed ball to close out the frame.
Barron put the game on ice in the seventh with his grand slam to to left field. He finished with seven RBIs and was a triple shy of hitting for the cycle.
Alderman and Redding matched Barron with three hits apiece in the game. Redding extended his hitting streak to nine games as he has connected safely in every game this season for GSW. Alex Kranick and Davey King added two hits apiece. Kranick extended his current hitting streak to eight games.
GSW starting pitcher Dylan Brown threw four innings, walked four and struck out one with both runs allowed being unearned. Justin Barnes (2-0) struck out three and held Thomas to one hit over his two scoreless innings of relief and Jarrod Crum sat the Night Hawks down in order in the seventh.
Starter, Nick Riley (0-2), took the loss for Thomas after surrendering four runs in two innings on the hill. He allowed six hits and struck out three batters.
The Hurricanes return home to open Peach Belt Conference play on Feb. 20 against North Georgia with a 1:00 p.m. doubleheader.

Lady Panthers roll past Spalding to round two of…