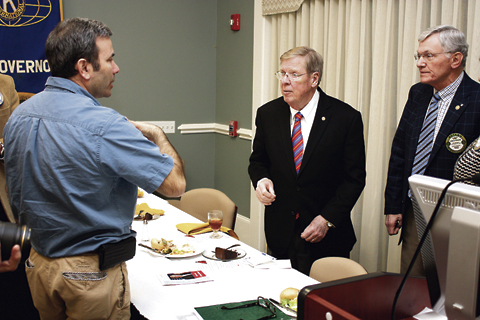 AMERICUS — Important legislative issues was the focus of the talk U.S. Sen. Johnny Isakson, R-Georgia, of Marietta presented at a combined luncheon meeting of the Americus Rotary and Kiwanis clubs at Georgia Southwestern State University Tuesday, but prefaced these by saying the untimely death of U.S. Supreme Court Justice Antonin Scalia last weekend is likely to launch a battle between the White House and the two political parties over a successor.
Speaking to a crowd of almost 100 people gathered in the university’s faculty dining room, Isakson said hopefully the appointment to the sudden Supreme Court vacancy will be made after the next president is elected and takes office next January.
Isakson, introduced by Rotarian Dr. Lou Riccardi, his friend since high school and roommate at the University of Georgia, said that Scalia’s death and the looming fight over appointing his successor to the high court could possibly swing the presidential election.
Georgia’s senior senator in Washington then moved on to three legislative issues he believes are important.
Of primary importance is the issue with the Islamic State in Iraq and The Levant (ISIS), known terrorists.
“As a United States senator I have the responsibility to protect our citizens and country. You can’t negotiate with these people; there is only one thing to do — go after them. We should employ highly trained operative forces, update nuclear weapons, and use the intelligence information that is gathered. I don’t want a single person to die. We have to realize these ISIS threats are real,” said Isakson.
Secondly, Isakson spoke on the nation’s economy.
“Over regulation is hurting the economy. The nation’s economy has greatly reduced productivity by over-regulating business. You cannot remove all risk in a free enterprise system, like my generation grew up under. We are handicapping ourselves by regulating ourselves right out of business and jobs. There is a balance of regulation and the playing field. Who wins or loses is not based on regulation but by competition.”
Lastly, Isakson talked about health care, saying, “With the break-through in medicine and science we are able to live and work longer. The Social Security and Medicare systems need reforming.”
He pointed out that adjusting the age of eligibility for Social Security benefits, except for those who are currently receiving it, would help secure funding for future generations.
Isakson fielded a number of questions, including Veterans Choice that allows a military veteran to seek the choice for health care under certain guidelines.
“Veterans Choice is working,” said Isakson. “My goal is to see every veteran receives health care in a timely manner. We have delivered more than 7.5 million (health care) appointments for military veterans since the passage of this bill. Veterans have a promise after active duty that they will have good health care available to improve their quality of life.”
In closing, Isakson, who is seeking a third term in the U.S. Senate, encouraged everyone to be good citizens and voice their opinion at the polls and vote in the upcoming fall elections.
“This is the most intense presidential race in history,” said Isakson. “It is no time to have a low voter turnout. We live in the greatest county on the face of the Earth.”

Lady Panthers roll past Spalding to round two of…