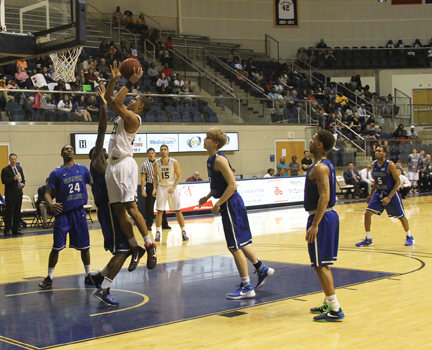 Michael Murray/Americus Times-Recorder: GSW’s Chandler Thomas tosses in one of 11 lay-ups during the Hurricanes’ Feb. 20 match against Georgia College. Thomas led the ‘Canes to victory with 25 points in the match. Thomas curently leads the PBC in field goal percentage, connecting on 66.9 percent of his attempts.

AMERICUS – Forward, Chandler Thomas, showed why he’s leading the Peach Belt Conference in field goal percentage as he sank 11 of 12 shots on the afternoon of Feb. 20 and scored 25 points to lead Georgia Southwestern (GSW) past Georgia College, 96-78.
GSW has won three of its last four games and improved to 11-14 overall and 7-11 in the Peach Belt Conference (PBC) while Georgia College had its two-game winning streak snapped and fell to 18-9, 11-7 in PBC competition.
The Hurricanes came out with guns blazing on Homecoming 2016 as they scored the first nine points on Saturday. Their advantage was bumped to a first-half high of 14 points when Adam Thoseby made a lay-up at the 9:38 mark to put GSW ahead 29-15.
Georgia College soon answered with a 13-3 run to pull within four points, but GSW outscored the Bobcats 11-4 over the final 5:25 to lead 43-32 at the half. The Hurricanes improved to 9-3 this season in matches in which they take a lead into the locker room at the break.
The Bobcats would get no closer than within seven points of GSW in the second period and an 11-0 run midway through the half, capped by a Terence Johnson three-point play, put the game out of reach and gave the Hurricanes a 21-point lead, their largest of the afternoon.
Georgia College entered the game with the second-best defense in the league, holding opponents to 71.3 points per contest, but could not slow down the GSW offense as the Hurricanes shot over 50 percent for the eighth time this season.
Jure Gunjina posted his third double-double of the season as he scored 19 points and pulled down a season-best 17 rebounds. The Hurricanes out-rebounded Georgia College, 43-37, and improved to 9-1 in games in which they win the battle on the glass. Damien Leonard added 20 points to mark the fourth time he has scored 20 or more points in a game this season. Thoseby chipped in 12.
Georgia College’s Terrell Harris led all scorers with 26 points. Harris finished with a double double as he added 11 rebounds. Dwight Anderson scored 19 points, Kelvin Nwanze chipped in 11 and Isaac Thomas scored 10. The Bobcats struggled from the free throw line where they missed nine of 20 attempts.
The Hurricanes wrap up their 2015-16 season on Feb. 24 when they host North Georgia at 7:30 p.m. on Senior Night.