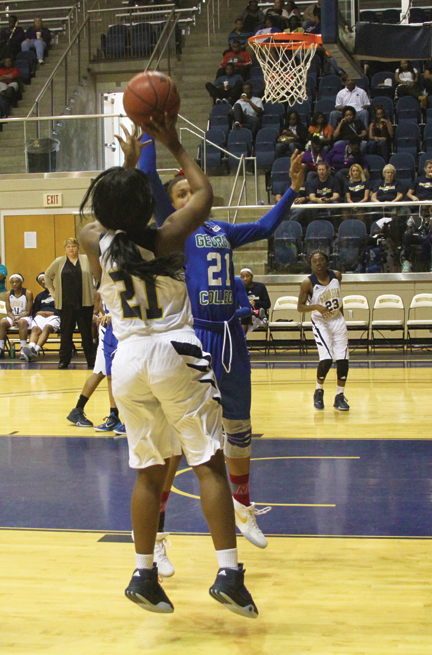 Michael Murray/Americus Times-Recorder: Aleah Holden tosses up a shot from the corner during the Lady ‘Canes’ Feb. 20 home contest against Georgia College. Holden finished the match with a game-high 16 rebounds.

AMERICUS – The Georgia Southwestern State University (GSW) women’s basketball team defeated Georgia College 81-67 on the afternoon of Feb. 20 in the in the team’s Homecoming match, held at the Storm Dome in Americus.
With the win, the Lady ‘Canes record improves to 12-13 overall and 6-12 in the Peach Belt Conference (PBC) while the Bobcats drop to 16-11 and 8-10 in the PBC.
GSW led by ten points five minutes into the game and quickly built up a 17-point advantage, propelled by a three-pointer from Jasmine McSwain, a jump shot from Khayla Owens, and a lay-up and one from Yvonna Dunkley. The Lady ‘Canes finished the first quarter with a 24-10 lead.
McSwain put in another three-pointer in the beginning of the second quarter before Georgia College quickly matched it and tossed in a lay-up to cut GSW’s lead to 10.
Emili Russ and McSwain both made baskets to expand GSW’s lead to 14 points and the Lady ‘Canes finished the second quarter with a pair of three-pointers from Dunkley to expand their lead to 39-19 at the half.
The Bobcats opened the second half with a trey and spent the next few minutes whittling away at the Lady ‘Canes’ lead. Five minutes into the half, the Bobcats had clawed their way to within 15 points.
The GSW ladies would not relent, however, and opened their lead to 26 points with 1:26 remaining in the third after a nine point streak.
Kenyona Armstrong put in a free throw, followed immediately by Russ with a lay-up, Whitney Young with a three-pointer, Aleah Holden with a free throw, and McSwain with a jump shot.
The Bobcats capped of the third period with a pair of free throws to head into the final quarter down 62-39.
Georgia College had their highest-scoring quarter in the fourth frame with 28 points. With 2:13 remaining, the visitors pulled within ten points of the lead and, by the 1:37 mark, were only down by eight.
GSW finished the game with four free throws from Dunkley and a lay-up from Russ cinch the 81-67 victory.
Dunkley set the pace for the Lady ‘Canes with 21 points in the match. McSwain followed close behind with 19 points while Russ contributed 17. Holden pulled in a game-high 16 rebounds.
The Lady ‘Canes return to the Storm Dome on Feb. 24 to battle North Georgia at 5:30 p.m.