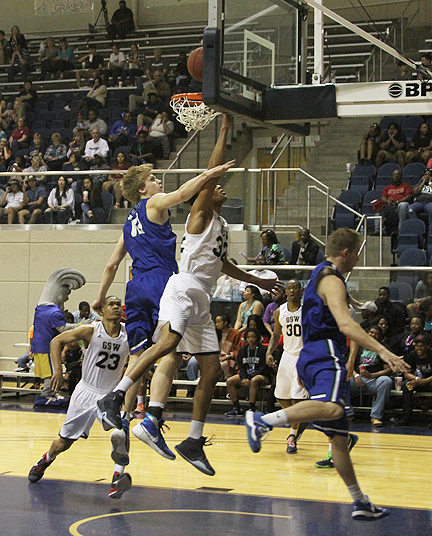 Michael Murray/Americus Times-Recorder: Damien Leonard (32)tosses in a lay-up during a Feb. 20 match in Americus as Chandler Thomas (23) and Terence Johnson (30) look on. Leonard led the Hurricanes in their season closer against the Nighthawks on Feb. 24 with 25 points.

AMERICUS – The Georgia Southwestern men’s basketball team rallied from 18 points down in the second half against the University of North Georgia (UNG) to force an overtime round on Feb. 24, only to fizzle in the extra session and drop the season finale, 110-101, in the Storm Dome.
GSW wrapped up its season with a record of 11-15 overall and 7-12 in the Peach Belt Conference, while North Georgia ended the year at 7-21, 5-14 in conference play. The Hurricanes also saw their six-game winning streak over North Georgia come to an end.
An 11-2 run midway through the opening period put the visitors ahead 32-19. North Georgia stretched its lead to 17 points with 1:24 left in the half before taking a 47-32 advantage into the break. It was a position the Hurricanes had not been able to work out of most of the season as they finished the year 1-12 when trailing at half-time.
Tanner Plemmons drained a three-pointer on UNG’s opening possession of the second stanza to put the Hurricanes in their deepest hole of the game, 18 points down with 19:28 to play.
While GSW put pressure on UNG with plenty of long-range shooting (nine of 15 from three-point range in the second half), the Nighthawks seemed to hold off any potential runs with timely scoring of their own.
It took back-to-back three-pointers from Damien Leonard, a lay-up by Jure Gunjina, and a three-pointer by Adam Thoseby just to cut a 10-point deficit to seven points, 77-71, with 7:46 remaining.
After UNG ran the lead back up to 10, the Hurricanes got three-pointers from Terence Johnson and Leonard as well as a leaner in the lane from Chandler Thomas to pull within four points, 83-79, with 4:35 left.
A Thomas lay-up with 2:39 to go cut the deficit to a point, 89-88, and following a basket by the Nighthawk’s Roderick English, Thomas struck again to make it a one-point game with 1:37 on the clock.
Thoseby forced overtime with his runner in the lane with 12 seconds remaining to tie the game, 92-92, but it almost proved to be a second too early as UNG pushed the ball up the floor and had an alley-oop to T.J. Williams go off his finger tips and slide over the rim as time expired.
Leonard hit a jumper out of the gates in the extra session to give the Hurricanes their first lead of the night and Brandon Price answered Williams’ ensuing free throws with a pair of his own to put GSW back on top, 96-94, at the 3:40 mark of overtime.
Plemmons dropped a three-pointer on UNG’s next trip down the floor to regain the lead and, this time, GSW would not recover. The Nighthawks iced the game with free throws in the final three minutes and capped it off with a dunk before the horn.
Southwestern launched 39 shots from beyond the arc Wednesday, a program high since joining the NCAA in 2006-07.
All five Hurricane starters scored in double figures. Leonard led the way with 25 points. Thomas wrapped up his collegiate career with a double-double, scoring 20 points and grabbing a season-best 13 rebounds. Price connected on four of six from long range en route to his 20-point performance. With his six assists on Wednesday, Price set a program record for assists in a season with 133, eclipsing the mark of 129 set by Darius Redding last year. Gunjina finished with 19 points and Thoseby added 13.
Plemmons, who entered the contest averaging 8.6 points per game, led all scorers with 29 points behind nine of 12 shooting from beyond the arc. Sean Brennan added 20 points, six rebounds and seven assists for UNG. Ebo Smith chipped in 19 points and English added 16 to go with a team-high seven rebounds.
The Hurricanes recognized their four seniors (Gunjina, Leonard, Thomas, and Thoseby) during a pregame ceremony.