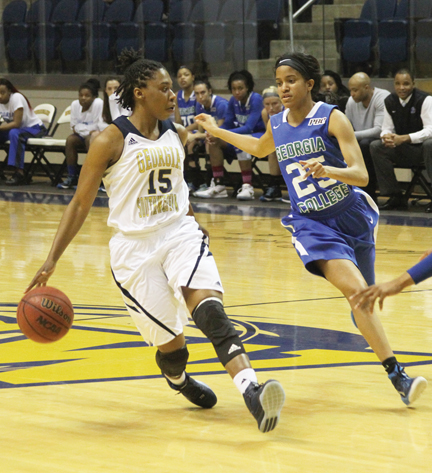 Michael Murray/Americus Times-Recorder: GSW’s Yvonna Dunkley dribbles past a Georgia College defender during a Feb. 20 contest in Americus. Dunkley was honored on Senior Night (Feb. 24) as a member of the 1,000-point club.

AMERICUS – The Georgia Southwestern State University women’s basketball team wrapped up their 2015-16 season with a 66-63 win over North Georgia on Feb. 24 in the Storm Dome.
This win gave the Lady ‘Canes a final record of 13-13 overall and 7-12 in the Peach Belt Conference (PBC) while North Georgia dropped to 17-11 and 9-10 in the PBC.
Yvonna Dunkley scored the first basket of the game, tossing in a three-pointer, followed by Jasmine McSwain with a jump shot to give GSW a 5-0 lead three minutes in.
North Georgia tied the game 5-5 with 3:20 remaining in the first quarter and put in a trey of their own pull ahead 8-5. The Lady Nighthawks greedily hung onto their lead to end the first quarter up 13-11.
When play resumed, Chanice Whitton quickly tied the game 13-13 with two free throws before Aleah Holden made an old fashioned three-point play with a lay-up and a free throw to give the Lady ‘Canes back the lead two minutes into the second quarter.
North Georgia snatched back the advantage with a lay-up and a shot from beyond the arc. Emili Russ put in a jump shot to tie it and Holden made a free throw to put GSW back ahead.
The lead changed two more times before GSW took and kept the lead with a nine point streak.
Va’Queshia Hall made a jump shot to spark the run, followed by Dunkley with a lay-up, Khayla Owens with a lay-up plus one before Hall capped it off with another two-pointer.
The Nighthawks finished the second quarter off with a pair of three-pointers to head into half-time down 28-26.
North Georgia tied the game fifteen seconds into the third quarter and GSW immediately blasted off on another nine point streak.
This time around, Dunkley set the gears in motion with a jump shot, followed by Holden with a lay-up. Dunkley soon tossed another three-pointer on the board and Ja’Quasha Sesler capped off the scoring spree with a jumper.
North Georgia came within two points of the lead with 2:51 left in the third, but the Lady ‘Canes were able to keep a four-point advantage heading into the final quarter.
The Lady Nighthawks tied the game and proceeded to grab a one point lead two minutes into the fourth.
Owens responded with a jump shot, followed by Dunkley with a trey, and Russ with a pair of free throws to give GSW a six-point cushion.
North Georgia came back to tie the game 63-63 with 41 seconds left on the clock.
Dunkley put in a lay-up with 19 seconds remaining and Owens finished the game with a free throw to give GSW a three-point win.
Dunkley set the pace for GSW with 17 points to lead the team to victory. Holden tossed in 11 points and picked up seven rebounds.
The lead changed eight times and the game saw six tied. GSW out-rebounded North Georgia 43-33.
The Lady ‘Canes recognized their four seniors, Kenyona Armstrong, Dunkley, Sesler, and Russ during a pregame ceremony. Dunkley was honored for having scored 1,000-plus points in her college career.