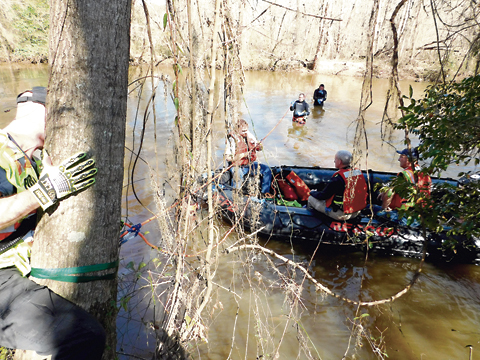 Shown are members of the Georgia Piedmont Region Search and Rescue K-9 team (green shirts) from Henry County and members of the Sumter County Fire & Rescue dive team, who, working in concert, recovered the body of an Americus man in the Muckalee Creek Sunday who had been missing since Feb. 4.

AMERICUS — After searching the Muckalee Creek and its environs near the bridge across Millard Fuller Boulevard eight times, the body of a missing American man has been located and identified.
On Sunday, the Americus Police Department, along with the Sumter County Fire and Rescue dive team and K-9 units from Georgia Piedmont Region Search and Rescue returned to the area where James Darren Fuller, 26, of 302 Hosanna Circle Americus, was last seen on the night of Feb. 4.
Shortly after 8:15 a.m. Sunday, the search dogs and the dive team discovered the body in the Muckalee Creek south of the bridge. Officials said the body had been trapped beneath plants and other debris.
The Georgia Bureau of Investigation (GBI) crime scene unit as well as the Sumter County coroner and personnel from the Georgia Department of Natural Resources were called to the scene. A positive ID was made on Fuller’s body Tuesday morning by the GBI.
Fuller disappeared Feb. 4 after being stopped in a routine traffic stop on South Martin Luther King Jr. Boulevard by an Americus Police officer for an expired tag. At that time, Fuller left his vehicle and fled on foot to the parking lot of Three Squares Diner and toward the woods edging the Muckalee Creek. The officer in pursuit of Fuller said he heard a splash when the chase led to the creek. The night was dark and the creek water was high and swift due to recent rains. Fuller’s family contacted police the following day because they had not heard from him since.
A massive search took place on that Friday, Feb. 5 involving the Americus Police Department, the Sumter County Sheriff’s Office, the Georgia Department of Natural Resources and the Georgia State Patrol Aviation Division, as well as Sumter County Fire & Rescue.
That search was suspended shortly after 2 p.m. because the waters of the Muckalee Creek were too high and gusty winds grounded the state patrol helicopter.
Authorities, including the Sumter Fire & Rescue dive tea, would return to the creek several more times — on Feb. 10, 11, 12, 17 and 18 — before finally recovering the body on Feb. 28.
Bill Hilsman, president of Georgia Piedmont Region Search and Rescue (GPS&R), said he and his team, along with three search dogs, decided to lend their help Sunday because they were aware that the dive team was going back into the water.
GPS&R is a nonprofit organization based in Henry County that trains dogs for search and rescue as well as recovery. The German shepherds, golden retrievers, Labradors, bloodhounds and mixed breed canines are trained and certified in live and cadaver searches. The GPS&R has been successful in searches involving Alzheimer’s patients, autistic children, dementia patients and others, according to Hilsman.
Hilsman said the body in the Muckalee Creek was discovered within 45 minutes after his dogs and the dive team entered the water.
Maj. Richard McCorkle, chief investigator of the Americus Police Department’s criminal investigations division, could not praise the search efforts of the dive team and the K-9s enough. 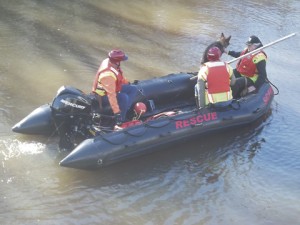 Members of the K-9 team launch into the Muckalee Creek. 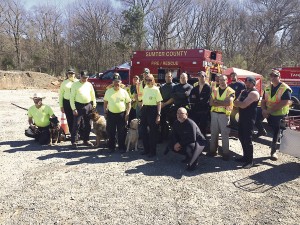 Shown above are members of the Georgia Piedmont Region Search and Rescue K-9 team (green shirts) from Henry County and members of the Sumter County Fire & Rescue dive team, who, working in concert, recovered the body of an Americus man in the Muckalee Creek who had been missing since Feb. 4.