Pair of Southland Academy athletes sign on with Point University 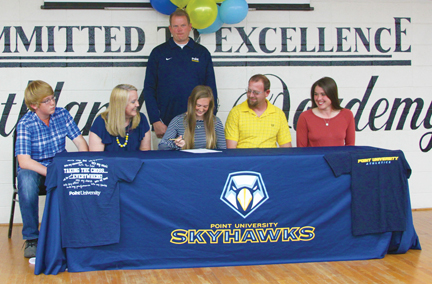 Michael Murray/Americus Times-Recorder: Southland’s Amber Jones signs her scholarship agreement with Point University as her family members and coaches look on. Jones will be playing soccer for the Point University Lady Sky Hawks next season.

AMERICUS – Point University, in West Point, GA, has recently signed a pair of talented athletes from Southland Academy to join the school’s Sky Hawks cheerleading and soccer programs next season.
On Feb. 25, Southland’s Emily Brown signed her scholarship agreement to cheer with Point’s squad following graduation. Less than a week later, Southland soccer player, Amber Jones, signed a similat agreement to join the Lady Sky Hawks on the pitch next year.
After her signing, Jones, an Americus native, told the Times-Recorder that she has been playing soccer her whole life. “I started when I was around four at the Rec Department,” she said. “My eighth-grade year at Southland, I started on the varsity team. I’ve been playing ever since.”
Jones currently serves the Lady Raiders as a midfielder.
After considering attending Truett-McConnell, Jones decided to play for Point after participating in a practice with the team. “I toured the school and really liked it a lot… It called to me,” she said.
Jones played basketball at Southland during her junior-high years and played on the school’s softball team as a freshman.
She received honorable-mention All-Region honors as a junior for her performance on the pitch with the Lady Raiders.
Jones said that she would like to pursue a pre-veterinary degree and go on to medical school following graduation.
Asked what she is looking forward to in her upcoming college career, Jones told the Times-Recorder, “I’m hoping to play all four years and, when I go to vet school, I want to play there as well, but I’m mainly trying to focus on my studies…”
Jones said that, in her spare time, she used to enjoy racing junior dragsters before she decided to devote all of her energy to soccer. She said that she also enjoys painting.
At the signing ceremony, Lady Raider head soccer coach, Tracy Muncy, told the Times-Recorder, “I’m excited for Amber. She is going to do a great job at Point. She’s a very godly and driven soccer player. She’s very coachable. She’ll be a big asset to that team. She’s worked hard for this.”
Randy Douglas, Point University’s women’s soccer coach, also told the Times-Recorder, “This is our first signing for the year. She’ll be bowing for some playing time in the outside midfield …. We have a good team and … I think that we have girls coming in that can take [the graduating seniors’] place… I expect us to be better than we were these last two years…” Douglas went on to say that the Sky 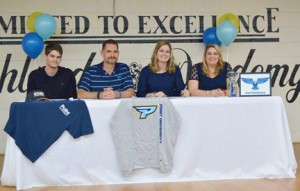 Submitted by Southland Academy:
Southland’s Emily Brown pauses for a photo with her family after inking her scholarship agreement with Point University. Brown will join the school’s cheerleading squad during the 2016-17 season.

Hawks had finished fourth and third in the team’s conference the past two years.
“I think there is a good season ahead of us and Amber’s going to be part of it,” he concluded.
Brown, a Florida native, who moved to Americus at the age of nine,  signed on with Point as well to continue her passion for cheerleading at the next level following graduation.
Brown told the times-Recorder that she has been cheerleading since she was very young and joined the Southland cheerleading squad at the first opportunity, in seventh grade.
On her decision to sign with Point, Brown stated, “It’s a really good christian school. When I visited the campus, everyone was really friendly. their academics are really good and they offer the degree program that I want.”
Brown intends to pursue a degree in biology and later go on to earn a veterinary license.
On her upcoming college career, Brown said that she is looking forward to meeting new people and cheering on the Sky Hawks.
On most days, after school, Brown works at the Sumter County Parks and Recreation Department (SCPRD), coaching 3-12 year-old gymnastics and cheerleading.