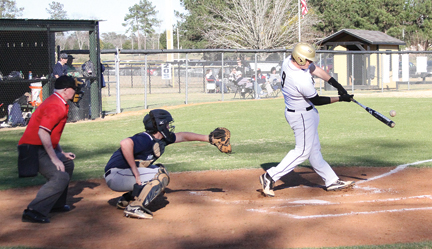 Michael Murray/Americus Times-Recorder: Hoyt Gurley knocks a single in the fifth inning of the Raiders’ home opener against SGA. Gurley led Southland’s batters with two hits in the contest.

AMERICUS – The Southland Academy Raiders kicked off their 2016 season in Americus on March 2, hosting the Southwest Georgia Academy (SGA) Warriors.
After a hard-fought battle, with two lead changes, the Raiders succumbed to a fifth-inning rally by the visiting Warriors that eventually sentenced the home team to a 6-4 defeat in the curtain-raiser.
The match marked the first time that the teams have faced off since 2014, when the Raiders dealt a 3-1 blow to the SGA boys.
Wednesday’s loss leaves the Raiders at 0-1 on the young season while the Warriors jumped to 2-0 at the conclusion of the match.
Raider pitcher, Reed Dillard, kicked the action off with a strike-out, but the Raiders were not so lucky with the second and third batters at the plate.
SGA jumped ahead early in the game, after a Warrior runner advanced to second on a passed ball and batter, Quinn Laguardia, knocked a double into the gap, advancing the runner to the plate to grab a 1-0 lead.
In the bottom of the initial frame, Southland shortstop, Brian Miller, led off with a single before Dillard drew a walk, but the Raiders were soon forced to return to the field with these two runners still on base.
It was three up, three down in the tops of the next two frames as Southland’s defenders quickly dispatched SGA’s would-be runners to return to the dugout in the bottom of the third.
The Raiders began to heat up in the third stanza after Miller managed to draw a full-count walk and advance to second on a sacrifice fly from George Wall. Dillard and Hoyt Gurley each drew walks as well to load the bases before Harrison Bell stepped up to the plate.
Bell proceeded to hit a double for the Southland cause, plating Miller and Dillard, and giving the Raiders their first lead of the game (2-1).
Opening the top of the fourth inning, SGA’s Laguardia hit a single into the gap and went on to exploit a costly Raider error two plays later, crossing the plate and tying the score 2-2.
Dillard quickly caught a fly ball and struck out the next batter to stall the Warriors’ progress from there.
The visiting team’s luck continued in the fifth inning as SGA’s Mason Stuart brought in a trio of RBIs on a homerun, giving the visitors a 5-3 advantage. SGA batter, Khloer Tabb, followed with a double to leave the Raiders in a four-point hole when they returned to the dugout.
Southland made up ground in the sixth and seventh frames, loading the bases each time and drawing walks to push Dillard and Bell across the plate, leaving the score at 6-4 by the end of the match.
Dillard pitched 5.2 innings, gaining four strikeouts and giving up no walks before relinquishing the mound to Bell. Bell pitched the final four outs of the match, walking one batter.
Gurley led the Raiders’ batters, gaining two hits in the contest, including one double.
Bell recorded a double for the Raiders and brought in a pair of RBIs.
Josh Hutchens and Stephen Barnes each recorded singles in the match.
The Raiders open region 3-IAAA competition on March 8, hosting the Tiftarea Academy Panthers. Southland’s boys will then hit the road on March 11, traveling to Dawson to face the Terrell Academy Eagles.