GSW celebrates ‘Day at the Capitol’ 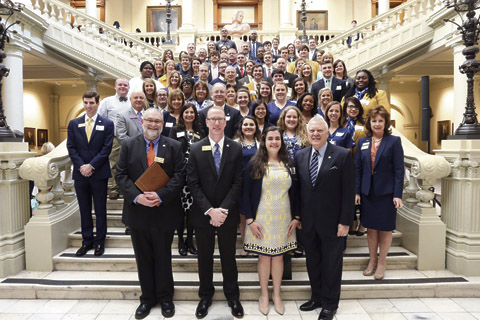 Representatives from Georgia Southwestern stand for a picture with Gov. Nathan Deal on the north steps of the Georgia Capitol.

ATLANTA — Georgia Southwestern State University (GSW) held its first “GSW Day at the Capitol” Wednesday to meet with the local legislative delegation and share the good things happening on campus to the entire General Assembly.
“Georgia Southwestern is growing in enrollment and in exposure in our state and surrounding states,” said GSW Interim President Charles Patterson. “Thanks to our students, faculty and staff, Georgia Southwestern made a great impression on legislators and Capitol staff members. The University was also honored by the reading of a resolution on the floor of both the House and the Senate, sponsored by Rep. Mike Cheokas in the House and Sen. Greg Kirk, Sen. Freddie Powell Sims, Sen. Dean Burke, Sen. Charlie Bethel, Sen. Tommie Williams and Sen. Michael Williams in the Senate. All of the Sumter County delegation were great hosts under the gold dome.
“The Leadership Sumter group from the Sumter County Chamber of Commerce joined Georgia Southwestern for the day, as well,” added Patterson. “This was a great opportunity for collaboration to join the team led by Barbara Grogan, Mary Beth Bass and Ivy Oliver.”
Approximately 50 GSW students, faculty and staff members attended the “Day,” and many more were involved in the planning process. Representation from every college and school on campus along with Admissions, the Rosalynn Carter Institute for Caregiving, the James Earl Carter Library and Athletics occupied the South Wing of the Capitol Building and promoted GSW’s value and academic quality.
Patterson and GSW leadership were able to spend time with each member of the Sumter County delegation which includes, Rep. Cheokas, Sen. Kirk, Sen. Sims and Rep. Ed Rynders. 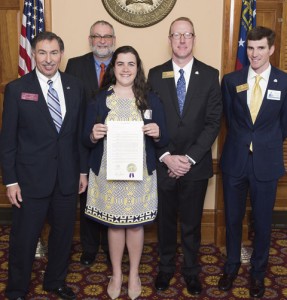 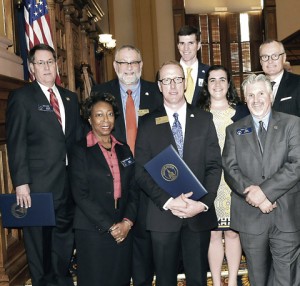