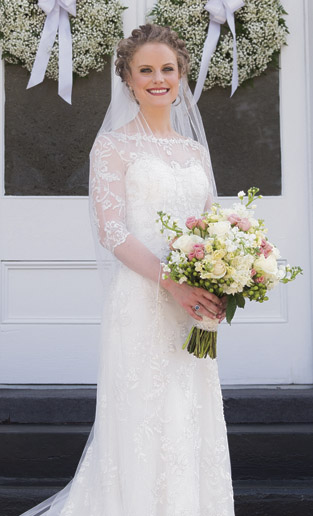 Laura Leigh Bell of Colquitt and Todd Stokes Roquemore of Americus were united in marriage at 3 p.m. on Oct. 10, 2015, at Lee Street United Methodist Church in Americus. The double-ring ceremony was officiated by the Rev. Betty Lou Miller of Americus.
The bride’s parents are Mr. and Mrs. Forest Melvin Thomas of Colquitt, Georgia, and David Fred Bell of Donalsonville, Georgia. The groom’s parents are Mr. and Mrs. Edwin Roquemore Jr. of Americus.
The bride’s paternal grandparents are Houston Fairl Gay and Carolyn Newberry Gay, and the late Fred Luther Bell, all of Colquitt. Maternal grandparents are Bernice Henry Davis and the late Charles Vernon Davis, also of Colquitt. The groom’s paternal grandparents are the late Mr. and Mrs. Edwin Morris Roquemore Sr., and maternal grandparents are Mrs. Gerald Glanus Stokes Sr. and the late Mr. Stokes, all of Americus.
The bride wore an ivory Maggie Sottero gown with a dramatic illusion lace back and illusion sleeves with a hand-embellished sheath gown, glimmering with metallic lace appliqués and embroidered with Swarovski crystals drifting from shoulder to floor-skimming hem. A delicate scalloped hemline completed her look; finished with pearl button over zipper back closure. She carried her maternal grandmother Bernice Henry Davis’ wedding bible along with her bouquet of white and light pink flowers with a mixture of greenery.
The maid of honor was Kimberly Kristen Perry of Americus. Bridesmaids were Camille Lauren Whittaker of Donalsonville, Sydney Blake Wasdin, cousin of the bride, of Tallahassee, Florida, Anna Katherine Callahan of Blackshear, Amanda Leigh Perry of Americus and Mandee Danielle Donnelly of Leslie.
Junior Bridesmaids were Makenzie Elizabeth Corriveau and Jalynn Kaylee Corriveau, both cousins of the bride, from Colquitt.
Flower girls were Arden Grace Wheeler and Avery Lane Wheeler, both of Americus.
Ed Roquemore Jr., father of the groom, served as best man.
Groomsmen were Ashley Boyd Wheeler of Americus, Gerald Glanus Stokes III, cousin of the groom, of Dixon, Illinois, Ryan Jordan Wills of Quitman, Andrew William Gordon of Americus, and Christopher Shawn Wheeler of Americus.
Honorary groomsmen were Scott Edwin Roquemore, brother of the groom, of Americus, and A1C Clayton Davis Bell, brother of the bride, of Eglin Air Force Base, Fort Walton, Florida.
Junior groomsman was Michael Gabrian Stokes, cousin of the groom, of Dixon, Illinois.
Ring bearers were Charles Thomas Fowler and Davis Henry Fowler, both cousins of the bride, of Colquitt.
The bridal party entered to the hymn “Ave Verum Corpus” played by pianist Mark Watford of Americus. The mother of the bride and mother of the groom entered to the hymn “Ave Maria” sung by Dr. Robert Dinella of Americus.
Following the wedding, a reception was hosted by the bride’s father David Fred Bell at The Carnegie.
The rehearsal dinner was hosted by the groom’s parents, Mr. and Mrs. Ed Roquemore Jr. at The Carnegie. The bridesmaid’s brunch was hosted by aunts of the bride and friends of the bride on the morning of Oct.  10 at the home of Lori Perry.
After the wedding, the couple traveled to Sint Maarten, N.A. The couple is at home in Peachtree City, where she is an analyst at athenaHealth in Atlanta, and he is an oncology sales specialist with Covis Pharmaceuticals in Atlanta.