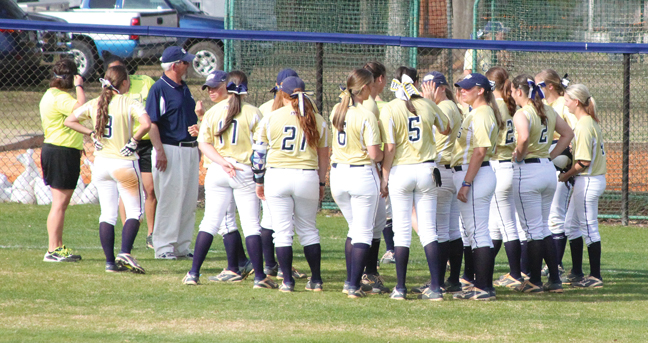 Michael Murray/Americus Times-Recorder: Members of the Lady ‘Canes take a break between innings in an early season match in Americus.

The Georgia Southwestern State University Lady Hurricanes softball team earned a pair of wins in a double-header against Brewton Parker College (BPC) on March 4 at Lady ‘Canes field in Americus before traveling to Augusta to open conference play on March 6.
GSW won both of their matches against the Augusta University (AU) Lady Jaguars, bringing the team’s record to 16-10 overall and 2-0 in the Peach Belt Conference (PBC).
GSW recorded four home runs during their early doubleheader on March 4, including two from freshman Hayley Tierce, to bring her season total to nine. Haley Warner hit her first of the season and third of her GSW career in game two.
Americus native, Rebekah Davis, celebrated her birthday with a walk off home run in game two.
The Lady ‘Canes won a 5-2 decision in the first match of the afternoon.
The first two innings went scoreless until Mikela Barlow hit a two-RBI single in the bottom of the third to give GSW a two-run lead.
BPC made it 2-1 with a one RBI double to center field in the fourth stanza. Graysen Sanders doubled to left field to plate Joshlyn Martin in the bottom of the frame to make it 3-1 and Tierce hit a two-RBI homerun in the fifth to make it 5-1.
One run in the top of the sixth helped BPC close its deficit to 5-2.
GSW finished with nine hits, five runs, and five RBIs.
Savannah Carlisle (W, 3-1) pitched seven innings, had 10 hits, two runs, walked four, and struck out one.
The Lady ‘Canes rode this momentum into the second contest of he afternoon, working towards another 8-0 victory over BPC.
Warner started GSW off with a double in the bottom of the second inning to plate Martin. Sanders then hit a sacrifice fly to bring in Bri Lewis for a 2-0 lead.
Tierce hit her second homerun of the day in bottom of the third to take a three-run advantage.
Warner hit a solo homerun to start off the bottom of the fourth. A two-run double by Barlow and an RBI double by Tierce soon gave the Lady ‘Canes a 7-0 lead.
Davis finished off GSW’s shut out with her birthday bash homerun to finish the game in five innings in a run-rule decision.
GSW finished with 11 hits, eight runs, and eight RBIs.
Haley Goodson (W, 5-5) kept BPC off the scoreboard all five innings. She gave up two hits, no runs, and no walks while striking out three batters.
Two days later, the GSW ladies traveled to Augusta to open PBC play against Augusta University at Jaguar Field.
They Lady ‘Canes had five batters with multiple hits between the two games, including Lewis with a pair of solo home runs.
The Jaguars took a one run lead in the bottom of the fifth with a solo home run. Erin Steele tied the game, scoring off a double from Barlow, who then scored off a single from Martin to retake the lead.
AU scored again in the bottom of the sixth stanza to tie the game and force it into extra innings.
In the top of the ninth, Lewis hit a solo home run to take the lead and win the game after the Lady ‘Canes defense held off the Lady Jaguars’ efforts at equalizing the score.
GSW finished with eight hits, three runs, three RBIs and two errors.
Brittany Childs (W, 4-2) pitched nine innings, gave up seven hits and two runs, walked two, and struck out seven.
In the series nightcap, the Lady ‘Canes went on to gain another 4-2 victory over the Lady Jaguars.
AU jumped into a one run lead in the bottom of the second off a double to left center.
GSW took the lead with a two-run single to right field from Tierce, plating Childs and Americus native, Ella Hawkins.
The Jaguars tied it in the bottom of the fifth off a single up the middle.
At the top of the sixth, Lewis hit another solo home run to take the lead for GSW and, at the top of the seventh, Barlow scored off a single from Martin to take a 4-2 win.
GSW finished with seven hits, four runs, and four RBIs.
Haley Goodson (W, 6-5) pitched seven innings. Goodson gave up seven hits and two runs, walked two, and struck out three.
The Lady ‘Canes returned home on March 8 for a double-header against Emmanuel. The results of this match were not available at press time.
GSW’s ladies will return to the diamond on March 9 in Columbus to take on Columbus State. The team will head back to their home court on March 12 to host Francis Marion.