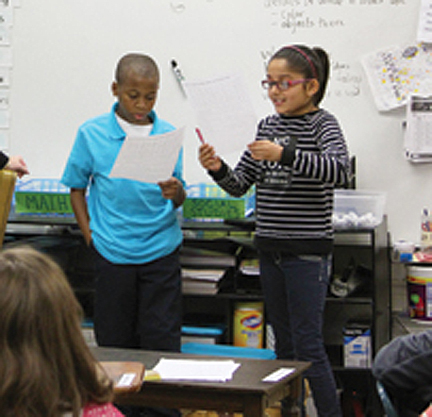 Michael Murray/Americus Times-Recorder: Fourth-grade students at FCS practice their French language skills, supervised by foreign language teacher, Joanna Arnold. In this photo, the children are presenting a skit to their classmates.

AMERICUS – Seven months after opening the school’s doors to students for the first time, the faculty and staff at the Furlow Charter School (FCS) have seen their share of difficulties and successes.
FCS principal, Valerie Duff and Chair of the school’s Governing Board, Elizabeth Kuipers recently sat down to talk with the Times-Recorder about the school’s current progress and what the institution has in store for the future.
Asked about her experiences at the school since taking the principal position, Duff told the Times-Recorder, “It’s amazing… We have some challenges that we’re going to get straightened out, but I am thrilled with what’s been happening in the classrooms… the teaching and learning.”
Duff recently came out of a four-year retirement to take the reins at the institution. “It was kind of like riding a bicycle. It just feels really natural,” she said.
She went on to say that her experiences at FCS have been very different from what she saw in her previous position as principal of Sumter County Primary School.
“The project-based learning is a really different approach,” Duff said before offering an example of the different type of approach to education that FCS employs from that very morning.
“[Mrs. Brewer’s class] is working on a lesson on animal habitats,” she explained. While in a typical classroom, an observer might expect to see children in desks, pencils in hand, busily identifying the differences in habitats, Duff’s description painted a very different picture.
“The whole class was out in the hall this morning,” she said. “Each kid has a rubric that they have to meet the standards for… they have to show [what they’ve learned]. Some of them are making dioramas. Some of them are creating posters or other types of models. That’s the kind of thing that our kids are engaged in.” 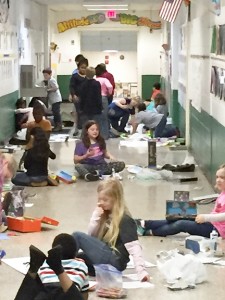