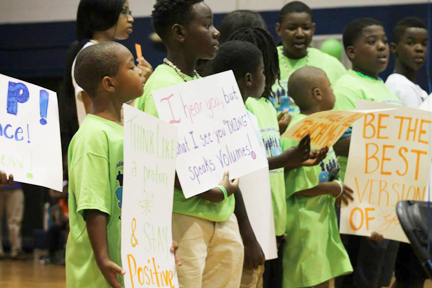 AMERICUS — The Sumter County S.A.V.E. (Standing Against Violent Environments) Initiative, a program aimed at mentoring local youths and helping them to understand the importance of making positive choices in their lives, has been gaining momentum in the community over the past year.
The initiative, initially developed in response to a rash of violent crimes that plagued the community early last year, was instituted by a group of concerned Sumter County citizens in April 2015.
One of the movement’s founders, Laura Edwards, recently spoke with the Times-Recorder about the initiative’s roots and the progress that has been made over the past year.
On the movement’s founding, Edwards told the Times-Recorder, “The [S.A.V.E.] Initiative started last April a little while after [a young girl was killed] here in Americus. We were just reflecting and thinking back … I actually grew up here … and I didn’t remember all of these deaths and shootings and [other crimes] … We were just brainstorming with some people and trying to come up with an idea to bring awareness to the situation and see what’s going on.”
During their brainstorming sessions, Edwards and other influential members of the community decided to think not only about the problems that the community has faced recently, but about potential solutions to these issues.
“That’s not the Americus that I knew growing up,” she said. “I reached out to a few different people from the community … We wanted to have a panel, so we invited people from the sheriff’s department, educators, businessmen, and others. We gave people from the community the opportunity to ask whatever questions they wanted and have the members of the panel address their concerns … We wanted a broad spectrum of people so that we could take a different approach to the problems that the community was facing. The goal was to get different ideas, different perspectives, and different parts of the community involved.
“When we did this, it was like fireworks went off,” she continued. “We were in the meeting for around three or four hours and we decided to host a rally to bring awareness of these issues to the community.”
In the initial meeting, the group had 12-15 individuals participate. Soon after the first brainstorming session, the group decided to host a rally to introduce the initiative to the community.
The rally, held at what was then Staley Middle School, had a turnout of over 300 people. Former NFL player and Americus native, Otis Leverette, was invited to give the keynote address. 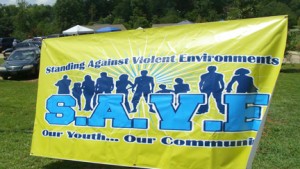 “The rally turned out awesome, Edwards said. “[Leverette] did a great job. I think the kids really related to him … I liked the idea of him speaking at the rally because he also grew up in Americus. I feel like he represents a sense of possibility. I think that a large part of the problem with some of the local kids is that they come from homes where they don’t see positive influences … A lot of the people from here that graduate college and open successful businesses eventually leave Americus. They don’t stay here.
“I think that a big part of what we should do is, once we do graduate and make something of ourselves, we should come back to show the kids, ‘Hey, you can do this, too,’” she added. “It’s hard, though, with this economy and the lack of jobs … But if we don’t do it, who will?”
Following the success of the rally in June, members of the panel organized another ambitious effort, called the Back to School Jam. The initiative partnered with Eazy Ride Auto Sales to hold the event, which included live DJ performances and onsite food vendors. Over 500 kids who attended the event were provided with bookbags and other school supplies.
“We were trying to create something fun for [the kids] because another part of the problem is that there are few options for the local youth to participate in around here,” Edwards said.
Members of the panel took the opportunity during the event to talk to some of the local children about some of the issues that they face in their everyday lives.
Building on the information gathered at this event, the panel soon decided to embark on another series of projects called “S.A.V.E. Saturdays.”
Not long after this project was set in motion, Edwards was contacted by Americus native, Tracy Hall, who had recently been involved in a robbery at her home on South Lee Street. According to Edwards, Hall told her, “Maybe some of our local youths are not aware of the consequences of these actions. Maybe they’re not aware of what can happen as a result of their behaviors,” referring to a series of robberies that had recently occurred in Americus. “If older people are hyping them up to [commit crimes] because they think that the younger kids won’t get in trouble if they break into a home or something else, they might not understand the consequences,” she continued.
Soon after, the program held its first S.A.V.E. Saturday program at a park on Bell Street in Americus. Upon their arrival, the group found that there was no one there.
“We started walking around,” said Edwards. “Soon, others began to take notice, thinking, ‘Who are these people?’ We walked around the neighborhood and ended up with, maybe, 25 kids. We played basketball with them and had some cheerleaders from the middle school come and teach the girls some cheers. We took that as an opportunity, after we played with them and gave them snacks, to talk with them.
“We talked one on one with them, getting on their level,” she added. “We asked them what is going on in their lives and what they think some of the problems might be. Sometimes, these kids might not have anyone to talk to.”
During the holiday season, members of the initiative also provided a Thanksgiving meal for a family in need.
On the future of the program, Edwards said that they are trying to build a solid foundation for the initiative and build a solid base of kids that are interested in participating in S.A.V.E. Saturdays.
The group’s Facebook page describes the project as a free monthly mentoring event for the youth of Americus. “We aim to help them to be successful at home, at school, and in the community,” the site states. “We are inviting girls and boys between grades 5-10 to participate.”
“We are here to help kids that need our help and want our help … kids that want to better themselves, but don’t know how,” Edwards said during the interview. “Or sometimes, their parents want them to, but don’t know how to help them… We’re still going to do the community outreach, but we’re leaning in the direction of mentoring. We’re trying to develop this foundation of kids that will come every month… Kids who are looking forward to this. It will be something fun for them to do. We want to teach them the basics. We’ll raise money and hold fundraising events … We’ll do all kinds of stuff to teach them about earning and working.
“We’d also like to, for instance, one Saturday a month, talk to young girls about common issues such as hygiene,” she added. “… just girl-to-girl issues that they might not have a woman figure in their lives to talk to about. We’d like to do the same for the boys with the men that are on the committee because we have all kinds of people involved.”
Edwards also discussed the possibility of using the proceeds from the proposed fundraising events to take some of the participants on a trip out of town, though she said that these plans were still in the preliminary stages.
“It’s amazing,” she said. “Some kids in this community have never been outside of Americus in their entire lives. They’ve never even gone to Albany … We want to give them the opportunity to raise their own money, show them how to work for it, and then show them something different … take them out of Americus and show them the different possibilities.”
A meeting to discuss further possibilities for S.A.V.E. Saturday projects was held in early February.
The initiative has a Facebook group, titled Save Our Youth 229.
The organization’s website can be found at http://standnow15.wix.com/save.
Individuals interested in participating in the initiative can contact the organization’s administrators at STANDNOW15@gmail.com