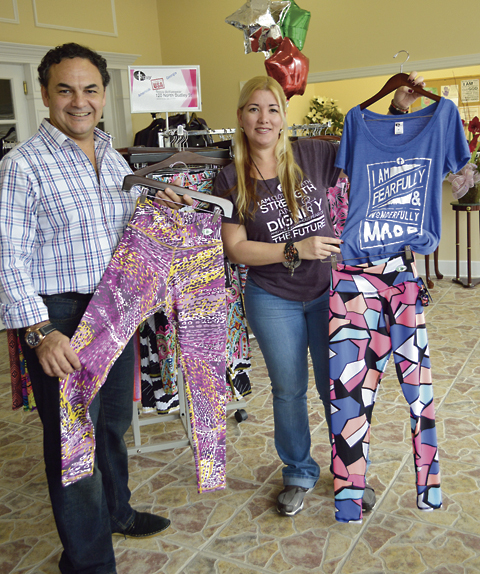 Tepuy Activewear owners Rene Vzcategui, left, and his wife, Elena Carne, in the showroom of their manufacturing company on North Dudley Street in Americus.

AMERICUS — Elena Carne and Rene Vzcategui proclaim their journey has reached its destination.
The couple and three daughters arrived in Americus last summer, coming on faith and hope alone, traveling from Miami and concluding a circuitous journey that began more than 16 years ago in Venezuela that wound through two continents and several cities.
“We consider Americus the place to bring up our children and become a part of the community,” said Elena.
She and her husband own and operate Tepuy Activewear, manufacturing active wear garments for women and children.
“We are where God wants us to be and that is why we will succeed,” she says. “We have been generously welcomed,” said Rene. “Everyone here is wonderful — it is a good feeling.”
Natives of Venezuela, the couple are proud to be naturalized U.S. citizens. An American flag hangs prominently in the front showroom window of the business on North Dudley Street, and a “Made in America” label is stitched inside each garment they make.
Just how they settled in Americus is interesting. It is a story that began more than 20 years ago when Elena was 15 and living in Valencia, Venezuela, a city near the capital city of Caracas, and made herself bathing suits on a borrowed sewing machine. Her friends admired them so much they asked if she make the bathing suits for them, too.
“I had so many orders I applied for and received a government microloan that I used to buy my first sewing machine and made the bathing suits for small boutiques,” says Elena. “I paid off the loan in less than a year, then took out another loan to buy three more sewing machines, hired seamstresses to help me fill orders and opened my own boutique that I named Pukas that operated like this one with separate sales/showroom and sewing room. I eventually had 18 employees and 26 sewing machines.” Elena was only 21 at the time. That’s when Rene enters the picture. They were in the same English class.
An industrial design consultant, Rene owned a small construction company and filled government contracts. Meanwhile, with Rene advising her, Elena began to explore opportunities to expand the business and find a niche market. The business soared.
“In three years we grew rapidly,” said Elena. “We went from having one boutique to 20 in Venezuela with five locations in Valencia alone and two in San Jose, Costa Rica. We were doing well, bought a home and Rene began working with me in the business.” 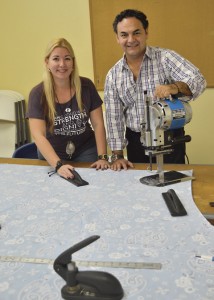 Elena and Rene in the cutting room at Tepuy Activewear.

Meanwhile, the Venezuelan government changed in 1999,  when the Socialists gained power — a movement that dramatically affected the country’s economy.
“Before the Socialist movement, Venezuela was a land full of opportunities,” said Rene. He ran twice for Congress but lost to the opposition party. “The economy was very troubled, business started slowing down, people became very poor and turned to stealing,” he said. “Then in 2002, our business was burglarized six times,” said Elena. “It was a very dangerous situation. Before the end of the year, the large oil companies and big businesses went on a six-month strike in an effort to pressure the Socialist Party. Anyone with different opinions was thrown into jail for not observing government rules. In December of that year, Rene learned that he was targeted for arrest and we were scared.” That is when the couple knew that had to flee the country, and made a plan.
They married on Jan.  23, 2003, and went to Miami for their honeymoon on Jan. 26, buying round-trip plane tickets to assure that they would return. This was their only option to leave without being detained.
“We left our family, our home and all our possessions,” said Elena. “It was the only way.”
Once in Miami, they immediately applied for political asylum and sought jobs — they had no money. Elena was a waitress in a cafeteria and Rene a cook. “We worked many places and sometimes I held down two jobs at a time; Rene once had three. We did that for many years.” Rene then landed a job in a computer parts warehouse and two months later he was promoted to manager and then sales representative, traveling to Latin American countries for sales contacts.
Their first child, Angeline, now 11, was born, and four years later their second daughter, Penelope, now 7, came along.
“I went to work at AT&T as a customer service sales representative and studied business administration at Miami-Dade College in the evening,” said Elena, “All this time, a return to the active wear business was in the back of our minds. When our third daughter, Samantha, now five, was born we decided that I should stay at home to take care of the girls and continue my studies in fashion at The Art Institute of Fort Lauderdale. I graduated magna cum laude and received awards for Best in Design and Best in Sportswear Digital Design and a scholarship. I returned to school for my bachelor’s degree in business management.
“We became U.S. citizens in 2012, and returned to Venezuela to visit family for the first time in 10 years,” said Elena. “Returning to Miami, I began making sportswear under the name Tepuy Activewear in the garage of our home, hired two seamstresses and sales were good.” It wasn’t long before she outgrew that space and had to expand to the main floor. However, tough times were ahead.
Suddenly Rene was without a job after his employer filed for bankruptcy. He began working with Elena and even though her business was good it wasn’t enough to support the family. They were confident that it could grow and needed more space but found nothing affordable. This was a difficult time for the family, said Rene.
Their neighbors were Tripp and Marisol Pomeroy, former Americus residents and business associate of Bill Harris Jr. at Café Campesino, who moved to Miami a few years ago. “Tripp saw we had the potential for a successful business and advised Rene to leave Miami, suggesting we relocate in Americus,” said Elena. “But Rene didn’t share that advice with me. Then last spring, Bill came to visit the Pomeroys and talked to us about moving to Americus and invited us to visit.”
“We liked everything and wanted to move,” said Elena.  However, she pointed out their final decision didn’t come until after a tour of Furlow Charter School and meeting with its board of directors. “We were immediately impressed with the school’s approach to education and what helped us reach the decision to move was to enroll our children at Furlow Charter,” said Elena.
On Aug. 8, the family arrived in Americus to establish their home and business. Today, Tepuy Activewear is growing and presently produces 1,000 garments a month with the plan to produce 3,000 pieces in the next three to six months and hire additional seamstresses. 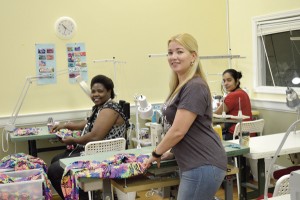 In photo below, in the sewing room of Tepuy Activewear are Elena Carne, foreground, and seamstresses Charity and Sandra.

“We want people to be aware that when they wear our product, they support Americus and America,” said Rene. “Our decision to move our business and family here was the best one we have ever made.”
Tepuy Activewear uses a Spandex stretch-like fabric in a wide selection of bright colorful prints and solids to manufacture leggings, capris, petal pushers, shorts, sports bras, tee shirts, jackets and sports vests for women and girls. Each summer Elena launches a new collection of bathing suits. Their retail showroom at 120 N. Dudley is open Monday through Saturday and the product is also available online at www.tepuyactivewear.com. They also sell wholesale to gyms and personal trainers.

AMERICUS — Southland Academy prides itself on its commitment to excellence, not only in its academic accomplishments, but also the... read more