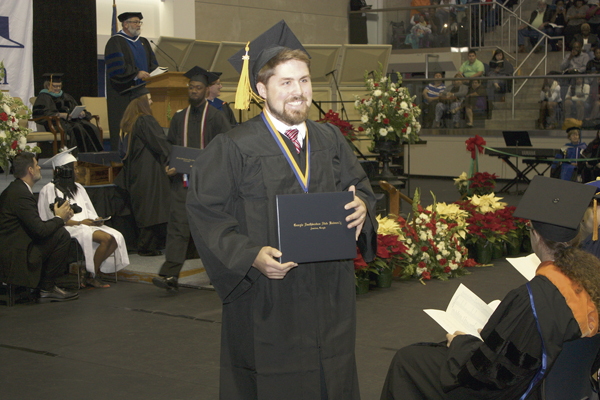 Colton Taunton was one of approximately 280 GSW graduates. An Americus native, Taunton earned a degree in psychology.

AMERICUS — For Georgia Southwestern State University (GSW), 2015 was a year of transition, enrollment growth, and new opportunity.
The year began with Charles Patterson, Ph.D., being named Georgia Southwestern’s interim president, following the successful, eight-year tenure of Kendall Blanchard, Ph.D. With Blanchard at the helm, student numbers increased, major construction projects were initiated and completed, and academic programs flourished on campus and abroad.
Patterson came to Georgia Southwestern from Georgia Southern University where he was vice president for research and economic development and dean of the Jack N. Averitt College of Graduate Studies. He also served as chair of the Georgia Southern University Research and Service Foundation.
Upon his arrival, Patterson continued moving Georgia Southwestern forward into its 110th year.
“It has been a tremendous honor to serve as the interim president of Georgia Southwestern State University during the past year and to serve alongside of our faculty, staff and students,” Patterson said. “Universities serve an important role in our communities, and the growth and vitality of the region is dependent upon the strength of our universities.”
A growing and thriving student body allows Georgia Southwestern to advance the learning environment for students and supports economic development activity in the region. The University’s enrollment grew by 3.3 percent in fall 2015. Eclipsing its goal of three percent enrollment growth, Georgia Southwestern was one of only four University System of Georgia schools in South Georgia that experienced any sort of enrollment gain. All Georgia “state universities” grew at an average of 1.5 percent. Much of Georgia Southwestern’s success this fall can be attributed to growth in graduate programs in nursing and education, including its education specialist and master’s in education program, and the emphasis placed on dual enrollment programs with area school systems.
At the state level, producing more educated Georgians by way of college completion is paramount. Georgia Southwestern’s efforts in support of Complete College Georgia have resulted in more well-qualified, work-ready graduates. Equally important is the University System of Georgia’s desire to keep college affordable. Georgia Southwestern’s commitment to quality and affordability is no different. A long list of national rankings over the last year serve as a clear indicator that Georgia Southwestern is one of the best-value colleges in the U.S.
Georgia Southwestern was ranked 40th out of the 100 Most Affordable Small Colleges in the U.S. by bestvalueschools.com. The site defined a “small college” as a traditional, four-year college or university that has 4,000 or fewer students. There are approximately 700 schools of this size in the U.S.
The School of Education was listed as a “Top 5” best value education program in Georgia by The National Council on Teacher Quality. GSW’s undergraduate secondary education degree ranked third.
According to a study by the National Association of State Boards of Accountancy, Georgia Southwestern accounting graduates who took the most recent CPA exam ranked 25th among universities in Georgia. GSW students taking the exam for the first time scored a 67.7 percent pass rate, which is more than 12 points higher than the national pass rate and nearly four points higher than the pass rate for Georgia.
And in the last two weeks, Georgia Southwestern’s graduate nursing program was ranked 45th in the nation by topmastersinhealthcare.com, and the human resource management degree was ranked second on the “50 Most Affordable Small Colleges for an HR Degree 2016” list assembled by humanresourcesmba.net. 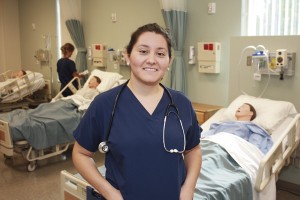 Nursing student Miriam Rodriguez in the state of the art lab in the Georgia Southwestern State University School of Nursing.

“Georgia Southwestern takes great pride in being an affordable university to all of our students, whether they are from within our region, the Atlanta metro area, out-of-state, or abroad,” said Patterson.
Over the last year, Georgia Southwestern has increased academic offerings. Namely, the University began offering its first eMajor in criminal justice through the University System of Georgia in a collaboration with Dalton State College. Sharing faculty resources from both campuses, the unique program is offered completely online. The bachelor of science in criminal justice eMajor is specifically designed to meet the needs of adult learners, military students, working adults and returning students seeking degree completion. This program will prepare individuals for career success in the field of criminal justice by providing students with a foundation of the knowledge, principles, theories and functions common to the American criminal justice system.
In fall 2015, Georgia Southwestern also began its first cohort for the family nurse practitioner graduate degree in nursing. This program is anticipated to grow in fall 2016.
A new University System of Georgia initiative is aimed at reducing the costs of textbooks for college students through a program called Affordable Learning Georgia. The program is providing grants for USG faculty, libraries, and institutions so that they can explore lower cost options for textbooks and other learning materials. Three GSW faculty members — Charles Huffman, Ph.D., Ru Story-Huffman and Gavin Bernstein — acquired ALG grants totaling $47,000.
Additionally, Judy Orton Grissett, Ph.D., assistant professor of psychology, received an Open Educational Resource Research Fellowship from the Open Education Group where she will study the impact of open resources in education.
“Georgia Southwestern is growing its enrollment in positive ways, including the development of new academic programs that will serve the region and the state of Georgia,” Patterson added. “There is a renewed spirit of engagement underway in Americus and Georgia Southwestern and I am excited to be collaborating with all of our friends and supporters of the University.”
A new effort at Georgia Southwestern is preparing students for careers in the film industry. In its first full-length feature film, the Department of Theater, Communication and Media Arts is giving students the opportunity to experience the process of creating a movie. The film, entitled “Which Way There,” completed filming in 2015, and the Department will hold a screening later this spring.
Additionally, the Fine Arts Building was renovated to include vast infrastructure improvements, improved gallery space and one of Georgia’s largest “green screens.”
Maybe the most unique opportunity for Georgia Southwestern’s continued growth now lies in its ability — thanks to the University System of Georgia — to recruit students from Alabama, Florida and South Carolina at Georgia’s in-state tuition rates. University Admissions staff has spent much of their time this recruiting season in these border states sharing what makes Georgia Southwestern special. The University looks for this new opportunity to pay dividends towards future enrollment, diversity, athletic competitiveness and student engagement on campus and in the community.
The ultimate goal is to see students graduate and enter the work place or continue their educations in graduate school. And in 2015, approximately 600 students graduated from Georgia Southwestern and began making their mark on the world.
— Submitted by Georgia Southwestern State University