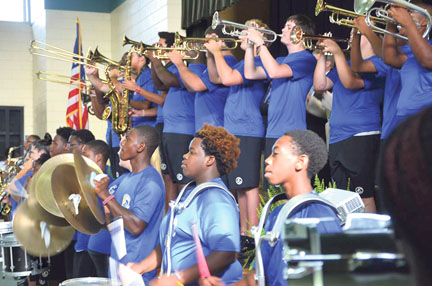 AMERICUS — It is a new day for Sumter County Schools. With an overwhelmingly positive SPLOST vote approving funding for the construction of a new high school and performing arts center, and over a million dollars in federal funding buying hundreds of new computers and Ipads for students throughout the system as well as massive improvements on the technology infrastructure throughout the district, Sumter County Schools are well-equipped to face a bright future.
With still the most extensive sports, arts, and extracurricular offerings in the region, the system offers opportunities in everything from band to soccer. The Gifted Program provides unique challenges for students with special abilities beginning in the first grade, and groups those students in special classes that allows them to challenge each other.
The Ombudsmen Program takes students who otherwise might serve as a disruption in a traditional classroom setting and places them in a special school environment that helps them address their particular challenges, thus providing the best learning environment for both those students and the students in the traditional classrooms who can learn without distraction. Discipline and good behavior remain a priority throughout the district, as is evident to anyone who has seen the orderly manner with which students transfer between classes.
There are many things to love about Sumter County Schools, 100 of which are highlighted on the Sumter County School’s Facebook page.
These reasons to be proud of the local school system include, No. 29: Principals who help the children sing and play music, like Intermediate School Principal Sharon Marcus, who addressed a crowd of several hundred people packed into the school’s auditorium to see the school’s Christmas concert of both band and choir. 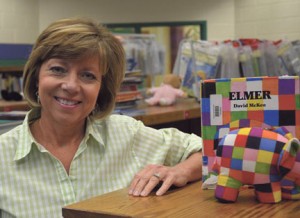 Submitted by Sumter County Schools:
Shown above, Lynde Parker was recently named Sumter County “Teacher of the Year”. As a llongtime teacher, Parker has devoted her life to making learning fun for her students.

“You are seeing tonight the other part of your child’s education: music and the arts,” said Marcus.
Americus-Sumter County High Principal Kimothy Hadley also commented on the system’s focus on the Fine Arts. “The Fine Arts promote well-rounded students by exposing them to the complexities of reading and performing music,” said the principal whose school boasts a number of bands and choirs.
No. 15: Lynde Parker, Sumter County Teacher of the Year, who gets children when they are first learning the magic of words on the page. She does everything she can to utilize that opportunity in a variety of creative ways, from games to projects to special events.
“When studying the continents, I used green screen photography to replace the solid colored backgrounds with iconic landmarks,” she said. “Students were given pictures of themselves wearing berets in front of the Eiffel Tower, donning rice hats standing by the Great Wall of China, and sporting pith helmets in front of the Amazon Rain Forest.”
In addition, Parker has worked with teachers to make a digital movie on famous Georgians, and has used puppets and scavenger hunts to make books come alive.
“I make learning fun and relevant,” said Parker. “My reward is seeing the joy on children’s faces when they are successful and knowing that giving them the love of reading will have a huge impact on their future.” 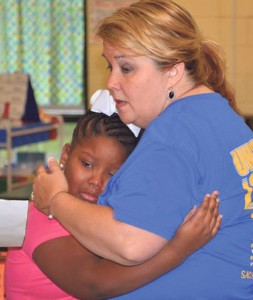 Submitted by Sumter County Schools:
Sumter County Elementary teacher, Sheryl Rush, demonstrates the caring environment that she cultivates in her classroom as she comforts an upset student.

No. 8: Teachers who aren’t afraid to care: When teachers who had worked with Sheryl Rush saw this picture of her on Facebook and in the newspaper, their response was uniform.
“That’s just exactly who she is,” said Angela Meadows who worked with her at Sumter County Elementary School and also at Sumter Primary. “She hugs her babies.”
Rush has been teaching elementary school for 25 years and is a champion of positive reinforcement.
“I treat the children like I would want someone to treat mine,” she said. “I wouldn’t want my child crying and nobody do anything about it.” 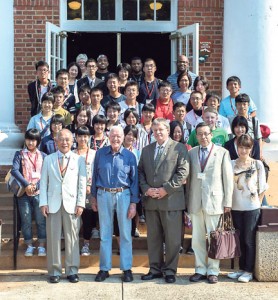 Submitted by Sumter County Schools:
Each year for about 25 years, Sumter County Schools have been hosting a delegation of Japanese students and dignitaries as part of a cultural exchange between Americus and its sister city in Japan, Miyoshi City. Shown above, members of this year’s exchange program have a photograph taken with former president, Jimmy Carter.

I list. Like the Tower of Pisa. Or a sinking ship. Unlike the above, I’m human and they aren’t, and... read more