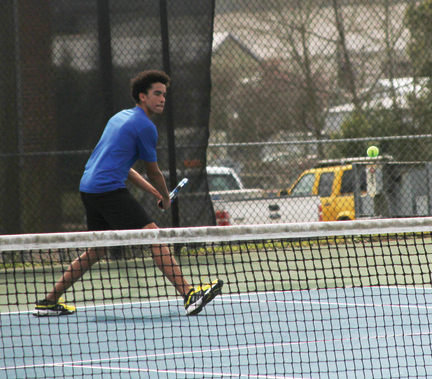 AMERICUS – The Americus-Sumter High School boys’ and girls’ tennis teams have been hard at work this year.
With eight meets under the team’s belt, the ASHS boys have amassed an impressive 7-1 record so far on the season. The ASHS girls are currently following close behind with a 6-2 record.
Both the ASHS boys and girls opened the season with tough losses to the Bainbridge teams before taking off on a winning streak that included pairs of victories over Dougherty County and Pelham for each group.
The ASHS teams went on to best Worth’s Lee County’s boys and girls before, most recently, earning a pair of wins over Worth County on March 12 in the first half of a double-header.
Later that afternoon, the ASHS teams hit the court once more to take on Taylor County. ASHS split the series, with the school’s boys earning their seventh straight win 4-1 over their visiting opponents. The girls’ team wasn’t so fortunate in that match-up, as the visiting Taylor girls brought their six-meet winning streak to a halt with a 4-1 defeat. 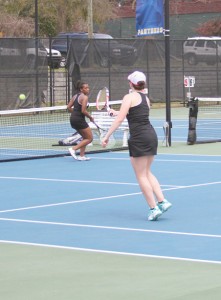 Michael Murray/Americus Times-Recorder:
ASHS’ Bailey Roberson returns a volley as her doubles partner, Karia Hadley, gets into position during the March 12 match. Roberson and Hadley won their first match of the series, but fell in the second.

In the opening series of the afternoon, the ASHS girls kicked off the competition, dealing a 6-1 defeat to Worth County.
In singles action, ASHS’ Jessica Clayton, Morgan Cloutier, and Kate Griffith each swept their opening matches, winning 8-0 victories.
The doubles team of Bailey Roberson and Karia Hadley took down their Worth County foes by a margin of 8-1 while Hannah Martinez and Wynter Pritchard worked towards an 8-6 victory. Similarly, the doubles team of Courtney Dickens and Allana Yawn took a 6-2 win in their match against their Worth County counterparts.
In boys’ action during the afternoon’s opener, Heeral McGhee was the only singles player to sweep the match, gaining an 8-0 win over his opponent.
On the doubles side of the court, the team of John Michael Martinez and Reggie Merrittalso took an 8-0 win in their match.
Singles players, Joseph Ndaayezwi and Sage Finch, each won victories in their early matches as well, finishing with 8-2 and 8-5 scores, respectively. Trey Dowell and Eric Barazza earned singles victories for the Panthers as well.
The doubles team of Austin Sandwich and Will McCoy earned an 8-3 win against their Worth County opponents.
In the afternoon closer, the ASHS girls found the visiting Taylor crew to be quite formidable opponents as the team took the 4-1 loss.
Cloutier was able to manage the only victory for the Lady Panthers in her match as she worked for an 8-5 win.
The ASHS boys fared much better in the afternoon series. Though none of the Panthers were able to go undefeated in the closing matches, McGhee and J. Ndaayezwi brought in 8-2 and 8-4 wins for the Panthers, respectively.
McCoy/Singley won their doubles match by a margin of 8-2 as the final doubles team of Aaron-John Ndaayezwi and Bobby Singley claimed an 8-5 win.
Following the matches, ASHS head women’s coach, Terri Lee, spoke with the Times-Recorder. Lee stated that Cloutier had recently rejoined the team after suffering two wrist injuries on the second day of practice. “It’s great to have her back in the line-up,” she said.
Asked about the team’s impressive winning streak and subsequent 6-2 record, Lee said, “We’re excited. We still have a long way to go. We have got to improve our skills and improve our games as the season progresses. We’re trying to get ready for the region and state playoffs. That’s what we’re working towards. We have to get better because everybody else is doing the same thing…”
Asked if she was surprised by the level of competition that the Taylor County girls brought to the court, Lee said, “I really thought that we would get that from Lee County. I thought they would be stronger and push us more. We have met some weak teams this season. We need to be playing teams that are going to push us to improve and Taylor definitely showed us that we still have a lot of work to do.”
ASHS boys’ head tennis coach, Carl Willis spoke to the Times-Recorder as well following the series. Asked how he felt about the team’s performance, Willis said, We feel really good about it, but I’m not pleased with where we’re at. I want to head in a better direction than we are right now. We’re going to continue working hard because, the one time that you don’t prepare is the time that you’re preparing yourself for failure.”