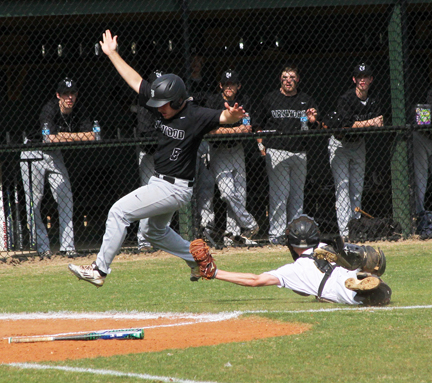 Michael Murray/Americus Times-Recorder: Southland catcher, George Wall takes a dive to dispatch a Valwood runner in the first inning of the Raiders’ March 16 tilt against the Valiants in Americus.

Despite a trio of hard-fought losses for the Raiders over the last week, Southland Academy head coach, John Brady, remains optimistic about the team’s chances at a playoff appearance this season.
The Raiders’ tough luck began in a March 11 contest in Dawson against the Terrell Academy Eagles. After an exciting performance from the Raiders, as well as their region 3-IAAA foes, the Eagles ended up besting the visiting Raiders 7-6 in extra innings.
On March 15, the Raiders hit the diamond again, traveling to Thomasville to battle Brookwood. In another nail-biter, the Raiders suffered a 4-3 loss to the Warriors.
The Raiders returned to their home field on March 16 to try their luck against the Valwood Valiants, of Valdosta. The Valiants came into the match with an undefeated region 3-IAAA record and left the field with another win under their belts. The Raiders got off to a strong start in the contest, propelled by a solo out-of-the-park homerun by Reed Dillard, but eventually succumbed to fiery third and fourth inning rallies by the Valiants that sentenced the team to a 15-1 loss.
The Raiders currently hold a 2-4 overall record, with a 1-3 record in 3-IAAA competition.
Brady recently sat down with the Times-Recorder to discuss this series of matches and talk about what’s ahead for the Raiders.
On the Terrell match, Brady stated, “We played well for most of the game. We made some late mistakes and let a 5-2 lead get away from us… Hoyt Gurley pitched that game. He pitched really well. Reed Dillard came in as relief.”
Gurley tossed for five innings, striking out four batters before ceding the mound to Dillard, who finished the game and struck out two.
“The guys battled after giving up the lead in the bottom of the sixth. We tied it in the top of the seventh and forced the extra inning,” Brady continued. “We snatched defeat from the jaws of victory there.” The Eagles went on to take the victory in the eighth inning.
Harrison Bell led the Raiders at the plate in that match, connecting on three shots in four at-bats to bring in a trio of RBIs. Gurley followed close behind, hitting three of four and pushing two runners across the plate. Dillard gained a pair of hits and crossed the plate three times in the match.
On the Brookwood match, Brady stated,” We seemed to make mistakes at bad times. We came out and scored two in the first, but gave up three unearned runs in the bottom of the inning.” The Raiders ended up taking a 4-3 loss in the contest.
“We had some tough luck in that game,” Brady added. “We had runners on first and second with no outs in the sixth inning. We tried a sacrifice bunt and ended up getting thrown out at third. We still had runners on first and second. We hit a shot in the hole between the shortstop and third base. Brookwood’s shortstop made a great play, coming up with the ball and threw us out at third again… the second batter in a row. We ended up not scoring there.”
“We led off the top of the seventh with a base hit and bunted him to second,” Brady continued. “Dillard was up at the plate. He hit a rocket right up the middle that hit the pitcher’s leg and bounced right to the first baseman, who stepped on the bag. That would have certainly scored our runner on second had it gone through. It was definitely tough luck, but hopefully, that sort of thing will even out as we move forward.”
Bell set the pace for the Raiders in that match as well, socking a double on his sole at-bat of the contest to bring in two runners. Dillard connected on two hits and added one RBI.
In his work on the mound, Dillard struck out six opponents.

Michael Murray/Americus Times-Recorder:
Southland’s Reed Dillard belts one out of the park to put the Raiders on the board during the first inning of Southland’s March 16 contest against Valwood.

On the Raiders’ devastating loss to Valwood, Brady said, “They just whipped us. We made a few errors, but they have a fine team and we have to give credit where credit’s due… We just have to tip our caps to them and say, ‘Good job.’ We have to try to do better next time.”
Gurley pitched the opening three innings before relinquishing the mound to Michael Hudgens, who wrapped up the fourth frame. Bell took the hill for the Raiders to pitch the fifth inning.
“Reed [Dillard] hit a bomb in the first inning,” Brady stated. “He’s having a good year so far. He’s doing an outstanding job as a leader of the team.
Asked what Raider fans can expect from the upcoming matches of the season, Brady said,” I think that we’ve shown, so far, that we’ll be competitive throughout the rest of the season. It’s all about getting better on our end, regardless of the competition… Right now, we’re focused on shoring up our defense… It’s going to be tough down the stretch because a lot of the teams in the region are really close, talent-wise.”
With only two seniors (Dillard and Gurley) to lend their experience on the diamond, the Raiders are a relatively young team. That’s certainly not to say that the younger players lack talent, however.
One of the highlights of the first inning of the Valwood game saw two of the team’s freshmen make an exciting play to wrap up the frame. Parker Weldon scooped up a grounder and fired it off to catcher, George Wall. Wall grabbed the ball and made a diving tag to dispatch a Valwood runner headed for home plate. This play, along with Dillard’s solo homer kept the  home team’s fans cheering through the initial stanza.
On this exciting play, Brady said, “Parker [Weldon] made a great throw on that play. And George [Wall] hung in there. As a ninth-grader, it’s sometimes not easy to be in that spot when all of the action is about to happen. That was nice.”
“The future’s bright,” Brady concluded. “We have a great young group of players. We’ll just keep trying to build this thing and steer it in the right direction.”
The Raiders will be looking to improve on their record on March 21, as they host non-region foes, Crisp Academy. The next afternoon, Southland’s boys will travel to Albany to take on long-time 3-IAAA rivals, the Deerfield-Windsor Knights.