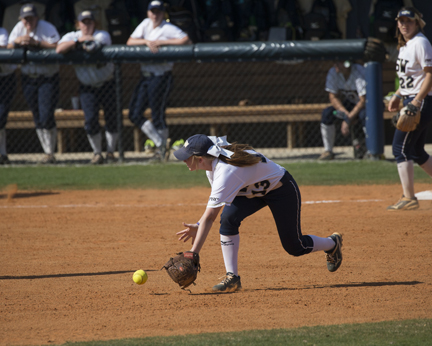 Chris Fenn/Georgia Southwestern State University: Lady ‘Canes’ sophomore, Bri Lewis, prepares to scoop up a grounder and fire it off to first base during a GSW contest in early March.

MONTEVALLO- It was a busy Sunday for the Georgia Southwestern State University (GSW) Lady Hurricanes softball team.
GSW’s Mikela Barlow combined seven RBIs with four runs in the team’s doubleheader against Montevallo University to lead her team to a pair of wins on March 19 at Orr Park in Montevallo, AL.
After a long up-and-down battle, the GSW ladies took a convincing 12-7 victory in the afternoon’s opener before closing out the series with a narrow 6-5 win over their hosts.
With the pair of victories, GSW improved to 21-17 overall and 6-6 in the Peach Belt Conference (PBC) while Montevallo moved to 13-20 and 3-5 in the PBC.
The Lady ‘Canes fell behind by three runs early in the initial match of the afternoon before tying it up in the third with a two-run double from Barlow and a run by Americus native, Ella Hawkins.
The Lady Falcons wasted no time retaking the lead as they pushed a runner across the plate in the bottom of the third frame.
GSW Freshman, Hayley Tierce, hit her 11th home run of the season and brought in Barlow to take a one run lead in the top of the fifth.
Montevallo, once again, responded in kind by scoring two more runs in the bottom of the fifth to take the lead again.
GSW’s Allee Denney tied the game in the sixth off a single from Erin Steele.
Hawkins put the Lady ‘Canes ahead once more in the seventh off a double from Joshlyn Martin, but Montevallo equalized the score with a double in the final stanza to push the game into extra innings.
In the bonus frame, GSW’s Haley Warner proceeded to knock a single to right center, plating Goodson and Steele. Barlow continued the rally, hitting a three-RBI home run to give GSW a five run lead and put the game out of reach.
From there, the Lady ‘Canes defense handily dispatched Montevallo’s batters to cinch the win.
GSW finished with 18 hits, 12 runs, 12 RBIs and one error. The GSW ladies doubled Montevallo’s hit total of nine in the match.
GSW’s Brittany Childs pitched six innings, gave up eight hits and seven runs, walked five batters, and struck out three.
Kaley Sikes pitched two innings, gave up one hit and no runs, walked two batters, and struck out one.
With the sweet taste of victory still fresh in their mouths, the GSW ladies immediately returned to the diamond for the day’s nightcap.
Barlow opened the scoring for GSW in the initial frame, but the Lady Falcons responded with a fury, pushing across four runners in the first inning and another in the third to grab an early four-run lead.
The Lady ‘Canes made their stand when, in the fourth frame, Lewis crossed the plate off a double from Graysen Sanders and Steele scored off a single from Hawkins.
The Lady ‘Canes scored two more runs in the sixth off a double from Barlow to tie the game. Martin scored the winning run off a fielders choice in the seventh and the Lady ‘Canes coasted their way to their second win of the afternoon.
GSW finished the match with 11 hits, six runs, six RBIs and no errors.
Haley Goodson pitched seven innings, gave up seven hits and five runs, walked two batters, and struck out five.
The Lady ‘Canes returned to their home field on March 22 for a non-conference doubleheader against Emmanuel College. The results of these contests were not available at press time.
GSW’s ladies return to action in Americus on March 25 with a double header against Young Harris College in Americus.