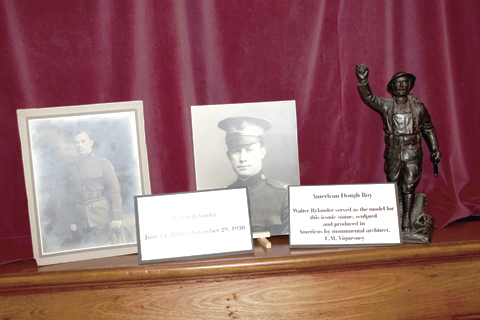 AMERICUS — The Rylander Theatre, located in downtown Americus, has recently been enhanced with Rylander family memorabilia which is helping define the history of the theater.
According to Managing Director Heather Stanley, the memorabilia donated by Walter Rylander III has served to help define the theater’s history and the name behind the theater.
Stanley said people locally and from all over the world come in the theater asking the question, “What is the significance of the letter ‘R’ or the name Rylander”? Stanley said the memorabilia helps answer the questions of the theater’s origins.
As Stanley makes her way through the foyer of the theater, she points to the exhibit which displays a black and white photograph of Walter Rylander Sr. dressed in is first lieutenant uniform.
“Walter Rylander provided the financial backing for the construction of the theater in 1920,” Stanley said. “The memorabilia is a wonderful tie-in with the family and their history in the community. We are honored to be the keepers of its history here.”
Among other memorabilia are a time clock which hung in the Rylander Automobile Co. building, which orignally opened in 1909. The building served as a dealership of Maxwells, Studebakers and Fords. The building now is Habitat for Humanity Headquarters and is located at 322 W. Lamar St.
Another item is a miniature copper statue of a doughboy,  manufactured and sculpted in the 1920s in Americus (in the automobile company location) by Walter Rylander Sr. and his business partner M. Viquesney, a monument architect.
“Walter Rylander served as the model for the iconic statue,” said Stanley as she explained that one of the doughboy statues stands in Rees Park.
The miniature statues were replicas of the doughboy statues which now stand prominently in parks and city squares throughout various American communities. The doughboy statue symbolically honors soldiers who fought in foreign wars. The doughboy statue, which stands in Rees Park today,  originally stood in downtown Americus between the intersection of Lee and Lamar streets.
Among other Rylander memorabilia was a pair of ladies shoes, sold in 1924 from the Rylander Shoe Co. The shoes were purchased by Mrs. J. McArthur. The family business seal was also displayed, and the Rylander family china which was designed with the letter “R” in gold, signifying the southern pride of the family name.
“Now, the memorabilia allows us to answer their questions,” said Stanley. “Just think: what if these items were sold in a yard sale or something. We would have lost a piece of our history.”
The memorabilia is on display in the Rylander Theatre from 11 a.m.-4 p.m. Tuesday through Friday, and during shows.