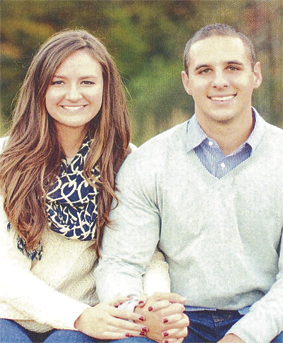 Jimmy and Shelia Patterson of Dacula announce the engagement of their daughter, Aubrey Tidwell, to Caleb Cochran, son of Bill and Beth Cochran of Leslie.
The bride-elect is the granddaughter of Mr. and Mrs. Kenneth Lance of Dacula.
She is a 2008 graduate of Dacula High School and received a master’s of education from Piedmont College, Demorest in 2013. She is employed as a middle school teacher in Cleveland, Ga.
The future groom is the grandson of Joan Cochran and the late Raymond Cochran of Bainbridge, and the late Mr. and Mrs. Easter Smith of Plains. He is a 2008 graduate of Americus High School and received a master’s in business administration from Piedmont College in 2014. He is now employed with Zaxby Inc. in Athens.
The wedding is planned for June 4, 2016, at Grant Hill Farms in Commerce.