‘Canes kick off homestand with win over MGS, run streak to 14 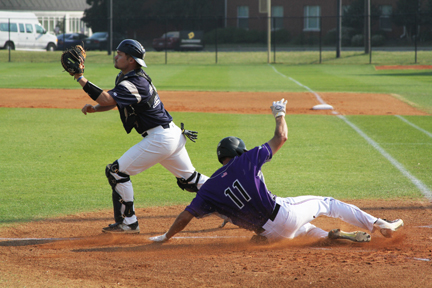 AMERICUS – The Georgia Southwestern baseball team opened its 10-game homestand with an 11-6 win over the NAIA’s 19th-ranked team, Middle Georgia State University (MGS), on March 23 at Hurricane Stadium in Americus.
With the win, GSW ran its non-conference record to 14-0 this spring, 16-13 overall, while Middle Georgia fell to 24-9.
After spotting the Knights a 4-0 lead in the first inning, GSW pushed across its first run in the second stanza with an RBI single off the bat of Will Redding.
Back-to-back two-out singles from Devyn Newberry and Evan Alderman set up a two-run fourth inning for the Hurricanes.
GSW grabbed the lead in the fifth when Davey King brought home Dakota Long and Zach Barron with a single down the right-field line.
Alex Kranick added some much needed insurance in the sixth inning with a three-run blast to left field, his second home run of the season.
It turned out the rally wasn’t complete as Jared Jones drilled a double to left-center field later in the inning to plate Barron and Brett Burgess.
Long drove in the Hurricanes’ final run of the game in the seventh with an RBI double down the right-field line to score Kranick.
Middle Georgia pushed across two runs in the ninth.
Long finished three-for-five at the plate with a double, an RBI, and one run scored. Alderman, who is currently ranked fourth in walks in the latest NCAA Division II stats report, added a pair of free passes to go with two hits. Kranick brought in three RBIs while King and Jones added two apiece.
Clint Wynn, Andy Mocahbee and Bryce Todd led Middle Georgia at the plate with two hits apiece. Mocahbee drove in a pair of RBIs as well. 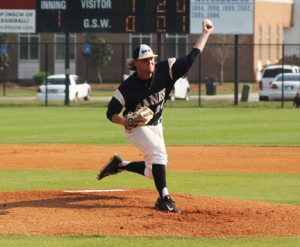 Michael Murray/Americus Times-Recorder:
GSW starting pitcher, Dylan Brown, launches a fastball down the middle during the first inning of the ‘Canes’ March 23 tilt.

GSW used four different pitchers in the game. Starter, Dylan Brown (3-0), shook off the first inning to follow with four and two-thirds scoreless frames. He allowed six hits, walked five batters, and struck out two. Matt Hubbard kept Middle Georgia off the board for one and one-third innings while Kyle Spinks struck out two in his scoreless frame. Mitch Holloway covered the ninth and was charged with two runs (one earned) and two hits.
MGS starting pitcherr, John Hartzog (1-3), tossed four innings, allowing five earned runs and six hits. Dalton DeLay was tagged for four runs in one and one-third innings on the hill. Nick Junger surrendered two runs in one and two-thirds innings and Stetson Walker kept GSW scoreless in the eighth.
Southwestern welcomed Augusta University to town on March 25 for game one of a Peach Belt Conference weekend series. The results of this contest were not available at press time.
The ‘Canes will continue the series on March 26, with games beginning at 1:00 p.m. and 4:00 p.m.
The Huricanes’ series of home contests will continue on March 30, with the heam hosting Valdosta State before returning to conference action on April 1 for a three-game series against PBC foes, Columbus State.
On April 6, the team will square off against West Georgia in Americus before heading to Tuskegee on April 12. The ‘Canes will return to Americus for a three-game series against PBC opponents, Flagler College on April 15.