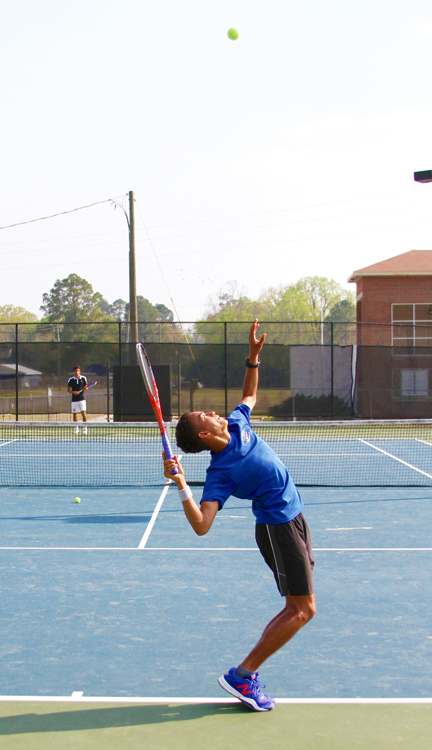 Michael Murray/Americus Times-Recorder: Left: ASHS’ Heeral McGhee rears back for a serve as he warms up beore taking on a Bainbridge opponent on March 23 in Americus.

The Americus-Sumter High School Panthers and Lady Panthers tennis teams recently made a strong comeback on the courts after taking a tough defeat against a pair of very strong Bainbridge teams.
The ASHS boys’ and girls’ teams traveled to Sylvester to take on Worth County in region competition, sweeping the series as each local team member deftly overtook their Worth County counterparts.
With the set of victories, the ASHS boys improve their season record to 10-2 while the girls hold steady at 9-3.
ASHS girls’ number-one singles player, Jessica Clayton, opened the competition with 6-3 and 6-2 victories over her opponent. In the second position, Morgan Cloutier bested her Worth County foe with a pair of 6-1 wins. In the third slot, ASHS’ Kate Griffith didn’t give up a single game as she took down her opponent with a pair of 6-0 wins. 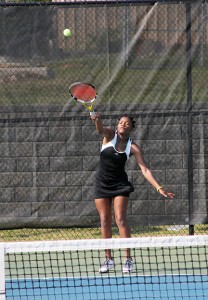 In girls’ doubles action, ASHS’ Kahria Hadley and Bailey Roberson swept their match with 6-1 and 6-0 wins. Courtney Dickens and Wynter Pritchard followed close behind, earning a 6-3 win before going on to work towards a tight 7-6 victory in their second match.
On the boys’ side of the court, singles player, Heeral McGhee, opened the action for the Panthers, earning 6-3 and 6-0 wins over his Worth County foe. Joseph Ndaayezwi took a pair of perfect wins, at 6-0, and Sage Finch completed the sweep with 6-1 and a 6-0 victories.
After a hard-fought battle, the boys’ doubles team of Austin Sandwich and Will McCoy won in a 10-7 tiebreaker decision after splitting their initial two matches. The doubles team of Reggi Merritt and John Michael Martinez went on to cinch the ASHS team victory with 6-1 and 6-0 wins in their matches.
The ASHS teams are currently taking a hard-earned break and are scheduled to return to action on April 6, traveling to Perry to take on the Perry High School Panthers. The teams will return to the court in Americus for their final regular-season series of the year against Marion County.