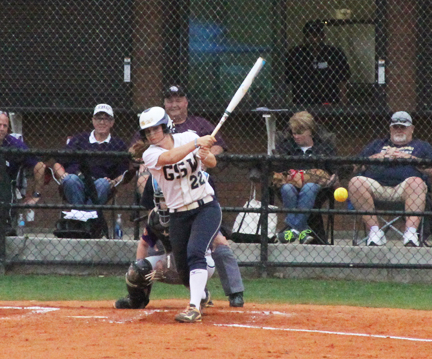 Michael Murray/Americus Times-Recorder: GSW’s Hayley Tierce slugs a grounder down the third-base line during the Lady ‘Canes’ March 25 contest against Young Harris College in Americus. Tierce hit her 14th home run of the season during game two of the Lady ‘Canes’ double header against VSU on March 29.

VALDOSTA – Despite out-hitting Valdosta State University (VSU)in game one of the series, the Georgia Southwestern State University (GSW) softball team suffered a pair of defeats on March 29 in a road double-header against the VSU Blazers.
Freshman, Hayley Tierce, hit her 14th home run of the season in game two of the series to tie GSW’s NCAA-era home run record.
GSW is now 22-22 overall while VSU improved to 26-8-2.
VSU bested the Lady ‘Canes 3-1 in the first contest of the afternoon.
The Blazers got off to a fiery start in the series opener, hitting a home run in the first frame before scoring off a wild pitch in the second to take an early lead.
Haley Goodson kicked off the fourth inning with a home run to score the lone run for GSW.
VSU hit another homer in the sixth to cinch the two-point win.
Goodson batted three for three at the plate, including a single, a double, and her home run.
GSW finished with seven hits, one run, one RBI, and no errors.
Kaley Sikes pitched six innings, giving up six hits, three runs, and a pair of walks. Sikes struck out two batters. 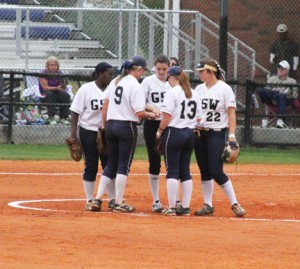 Michael Murray/Americus Times-Recorder:
Members of the Lady ‘Canes converse in the pitchers’ circle during the team’s March 25 contest against Young Harris. Hayley Tierce (22) and Haley Goodson (9) each logged home runs in the Lady ‘Canes’ March 29 double-header against Valdosta State.

The Blazers rode this momentum into the second contest of the afternoon, working towards an 11-3 victory.
Once again, the Blazers came out swinging to take an early lead.
VSU pushed five runners across the plate in the first inning, two more in the third, and two in the fourth to pull ahead by nine runs.
With one out and one runner on base, GSW’s Mikela Barlow doubled to left field to plate Hannah McCain before scoring off Tierce’s home run to trail VSU by six.
VSU scored two more in the bottom of the fifth to take the eight run win and end the game in five innings.
GSW finished with seven hits, three runs, three RBIs, and two errors.
Savannah Carlisle pitched one out, giving up one hit, five runs, and four walks.
Brittany Childs pitched four innings, giving up 10 hits, six runs, and six free passes. Childs struck out one batter.
The Lady ‘Canes return to action in Americus on April 2, playing a conference double-header against Lander University. The opening match is scheduled to begin at 5:00 p.m.
The team will then host conference opponents, USC Aiken in a double-header the following afternoon. The Lady -Canes travel to Milledgeville on April 8 to battle Georgia College.