GSW’s non-conference streak brought to a halt by VSU 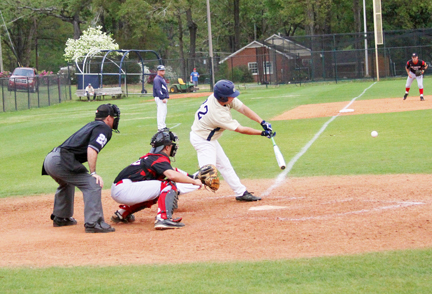 Michael Murray/Americus Times-Recorder: GSW’s Alex Kranick takes a powerful swing during the Hurricanes’ March 30 contest against VSU in Americus. Kranick brought in three RBIs for the Hurricanes in the match.

AMERICUS – The Valdosta State University (VSU) baseball team scored in all but one inning on March 30 at Hurricane Stadium and had little trouble dismantling Georgia Southwestern State University (GSW), 20-5.
It was the first time GSW has allowed 20 runs in a game since April 19, 2008.
The Hurricanes suffered their first non-conference defeat of the spring (14-1) and saw their overall mark dip to 17-16, while Valdosta State improved to 19-11.
The Blazers pushed a run across in the first inning, but landed their first major blow in the second stanza when seven hits led to five runs and a 6-0 lead.
Valdosta State added a run in the third frame and another in the fifth before posting its second five-run frame of the evening in the sixth to stretch the margin to 13.
Alex Kranick put GSW on the board in the seventh when he cleared the bases with a three-run double. Kranick scored two batters later off a Zach Barron blast over the left field wall to cap a five-run inning for the Hurricanes. GSW trailed 16-5 after the seventh inning and VSU added a pair of runs in both the eighth and ninth frames.
Barron finished three-for-five at the plate with two RBIs and a run scored. Kranick belted his 15th double of the season and turned in a two-for-three performance with a walk and three RBIs.
Tyler York and Clint Carr both went four-for-five to lead Valdosta State batters. York was walked twice, scored twice and drove in a run. Carr had a three-run triple, scored twice and drove in a total of five runners. Ryan Smith collected three hits, including a solo home run, and three RBIs. 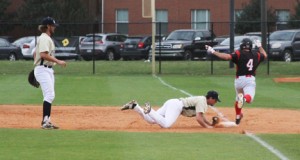 Michael Murray/Americus Times-Recorder:
GSW pitcher, Matt Hubbard, makes a diving tag at first base to dispatch a VSU runner during the sixth inning of the Hurricanes’ March 30 match against the Blazers. First baseman, Davey King (left), made the toss to Hubbard after fielding the ball.

The two sides combined to use 15 pitchers in the ballgame.
GSW trotted seven different hurlers to the hill. Starter, Mitch Holloway (2-2), was tagged with the loss after running into trouble in the second inning.
VSU burned eight arms over nine innings. Relief pitcher Beau Blair (2-1) kept the Hurricanes off the board in the second and third innings.
Georgia Southwestern returns to Peach Belt Conference play this weekend with a series in Americus against Columbus State.
Start times for the series against Columbus State this weekend in Americus have been adjusted due to expected rain.
GSW and CSU will play Game one of the series on April 2 at 6:00 p.m. and wrap up the competition on April 3 with a double-header, beginning at 1:00 p.m.
The Hurricanes are scheduled to welcome Thomas University to Americus on April 5 before returning to Hurricane Field to take on Tuskegee University the following afternoon.